The House Of the Ship Franz Kafka, 27 years old, 1910 Pařížská Street (the former Nicholas Street) arose from the ashes of the Jewish ghetto to connect Old Town Square with the Vltava and further across Čechův bridge with the neighborhoods on the left bank. The main artery of the Jewish Quarter was today’s Široká Street, perpendicular to Pařížská, and part of the journey connecting today’s area of Karlín to towering Vyšehrad. Mikulášská (Nicholas) Street (as it was named for Kafka’s entire life up until 1926) was named neither for the church at its south end, nor for the old Mikulášská street that disappeared during the slum clearance, but after the Russian czar Nicholas II.

In June 1907 the Kafka family had moved from the medieval house „Of the Three Kings“ into the more elegant Nicholas Street and lived there six and a half years until November 1913 when they moved to the opposite end of the very same street, to Oppelt house on the corner of Mikulášská and Old Town Square. Kafka lived there during his first years of work, first just briefly at Assicurazioni Generali and later at the Workers Accident Insurance Institute for the Kingdom of Bohemia. Although he was unsuccessful at first, for five years there after work, mainly at night, he would struggle to compose his literary ideas. He managed to produce a handful of little pieces of prose from different genres that were published, and a lot of manuscripts that ended up in the fireplace. 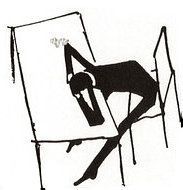 Only towards the end of his time there, in the fall of 1912, he reached a turning point which led him into the history of literature: on the night of September 22 to 23, 1912, Kafka wrote down the famous story The Judgment. He wrote in his Diaries: "I wrote the whole story “The Judgment” from 10 o’clock in the evening until six in the morning on the night between the 22nd and 23rd. My legs were so numb from sitting that I could barely move them out from under the desk. I was exhausted and thrilled as the story unraveled, as I somehow waded forward. I felt my own body weighing me down throughout the night. I felt that it was possible to attempt anything; that for everything there is a great fire ready to destroy and resurrect even the most bizarre ideas. How the air outside my windows turned blue. A wagon went by. Two men crossed the bridge. I finally looked at my watch at two in the morning. When the maid first walked through corridor, I wrote my last sentence. A darkened lamp and daylight. Weak pain in my heart. The exhaustion that had stopped in the middle of the night. Shaking, I enter my sisters’ room. Reading out loud. Before that I stretch in front of the maid and say: “I’ve been writing up until this moment.” A look at the bed, untouched as if someone just brought it in. It confirmed my belief that with my penning the novel, I descend into shameful depths of writing. This is the only way to write, just like this, in this context, with such complete exposure of body and soul." 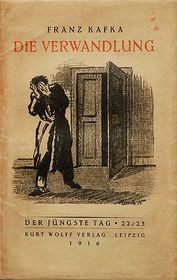 The Metamorphosis Shortly after that, other pieces follow one after the other: „The Stoker“ and „Metamorphosis“ are born, „Contemplation“ is published. He returns also to the novel Amerika. The Metamorphosis written in this apartment with its layout of rooms clearly reproduced in that work: Just as in the house “Of the Ship” Gregor Samsa lived in a high ceiling room with side doors, leading to adjacent rooms, one on the left, one on the right, a third floor led into an antechamber or vestibule.

The apartment building "Of the Ship" was one of the palatial apartment buildings that had grown up on the razed area of the old Prague ghetto. Although the house belonged to a Czech jeweler Alfréd Nikodém, it was rented for the most part to German tenants. 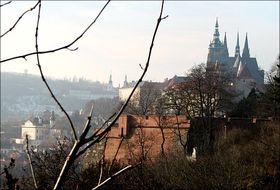 Panorama across the Vltava river From the six story building U Lodi, where the family lived on the fourth floor, the apartment had a nice view of the embankment, the river, the start of the unfinished bridge. Furthermore, a unique panorama beyond the Vltava River presented itself to view: on the left edge of the overview there appeared the Observation Tower on the Mount St Lawrence, then the church towers of the Premonstratensian Cloister Strahov, finally the steeple of St Vitus' Cathedral and the Prague Castle as well as the Belvedere Heights (Letná) with the Hanava Pavilion. Across the river Kafka could see the Civilian Swimming School, a public swimming establishment on the river which he liked to visit during the summer. That view contrasted strongly with the neighborhood. The slum clearance of the Jewish Quarter was not yet finished, and the large area up to the Vltava gave the impression of an abandoned construction site. To the right, in the space of today’s Curiových Square, was the devastated Janské Square – named after the Czech patron Saint Jan Nepomucký, whose dead body was said to be found here. The new university building site Kafka could see there, a construction area in whose low laying segments one could still trace the demolished houses of the Jewish Quarter. 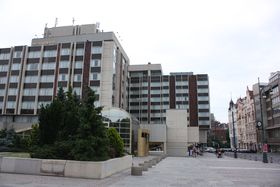 Hotel IntercontinentalA new building of the German University of Prague was planned for the building lot right across from new Czech university, also planned for this site. After the inimical protest against Germans the construction did not materialize. Finally toward the end of the twenties the law faculty of the Charles University was erected on the property. In the last days of the war in 1945, the house “Of the Ship” was destroyed in an artillery barrage and the ruins then razed. In 1974, the Hotel Intercontinental was built on the vacant lot that had become of these places. 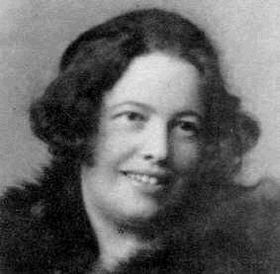 Hedwig Weiler Shortly after his move to Mikulášská, Kafka wrote his brief time lover, Hedwig Weiler: "Since last week the street where I live suits me indeed. I call it „The runway for suicides“, because the broad street leads to the river. There a bridge is being built, and under Belvedere on the opposite bank (where the hills and parks are), a tunnel will run so you can stroll down the street, cross the bridge and wind up under Belvedere. So far, however, instead of a bridge, there is only scaffolding: the street leads just to the river. But I’m just joking, it will always be nicer to walk across the bridge to get to Belvedere than into the river and up to heaven."