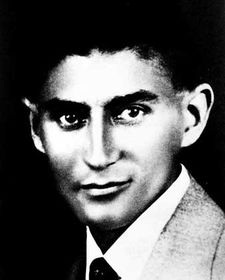 Kafka was born on July 3, 1883, into a middle-class Jewish family of the German community in Prague. His father, Hermann Kafka came to Prague from Osek, a Czech-speaking Jewish village near Písek in southern Bohemia. After working as a traveling sales representative, he established himself as an independent retailer of men's and women's fancy goods and accessories. Kafka's mother, Julie, was the daughter of Jakob Löwy, a prosperous brewer in Poděbrady. Franz was the eldest of six children. He had two younger brothers: Georg and Heinrich, who died at the ages of fifteen months and six months, respectively, before Franz was seven; and three younger sisters, Gabriele ("Elli"), Valerie ("Valli") and Ottilie ("Ottla").

During World War II, Kafka's sisters were sent with their families to the Łódź Ghetto and died there or in death camps. Ottla was sent to the concentration camp at Theresienstadt and then on 7 October 1943 to the death camp at Auschwitz.

Kafka's native tongue was German, in which he composed his literary works, but he was also fluent in Czech. Later, Kafka acquired some knowledge of French language and culture; one of his favorite authors was Flaubert. From 1889 to 1893, he attended the Deutsche Knabenschule, the boys' elementary school at the Masný trh/Fleischmarkt (meat market), the street now known as Masná street. His Jewish education was limited to his Bar Mitzvah celebration at 13 and going to the synagogue four times a year with his father, which he loathed. After elementary school, he was admitted to the rigorous classics-oriented state Gymnasium, Altstädter Deutsches Gymnasium, an academic secondary school with eight grade levels, where German was also the language of instruction, at Old Town Square, within the Kinsky Palace. He completed his Maturita exams in 1901... See more

Kafka's life is closely connected with Prague. Here are some places whre Kafka was living, working or just walking.

Click the numbers on the map to read about each place. 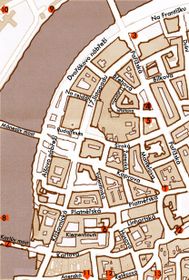 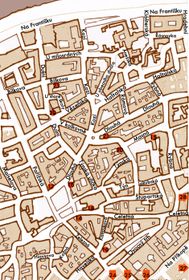