Alois Senefelder was an Austrian actor and playwright who invented the printing technique of lithography in 1798. Born Aloys Johann Nepomuk Franz Senefelder in Prague where his actor father was appearing on stage. He was educated in Munich and won a scholarship to study law at Ingolstadt. The death of his father in 1791 forced him to leave his studies to support his mother and eight siblings, and he became an actor and wrote a successful play Connoisseur of Girls. Problems with the printing of his play Mathilde von Altenstein caused him to fall into debt, and unable to afford to publish a new play he had written, Senefelder experimented with a novel etching technique using a greasy, acid resistant ink as a resist on a smooth fine-grained stone of Solnhofen limestone. He then discovered that this could be extended to allow printing from the flat surface of the stone alone, the first planographic process in printing. He joined with the André family of music publishers and gradually brought his technique into a workable form, perfecting both the chemical processes and the special form of printing press required for using the stones. He called it "stone printing" or "chemical printing", but the French name "lithography" became more widely adopted. He secured patent rights across Europe and publicized his findings in 1818 in Vollstandiges Lehrbuch der Steindruckerei which was translated in 1819 into French and English. A Complete Course of Lithography combined Senefelder's history of his own invention with a practical guide to lithography, and remained in print into the early 20th century. 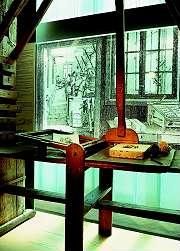 Senefelder was also able to exploit the potential of lithography as a medium for art. Unlike previous printmaking technique such as engraving which required advanced craft skills, lithography allowed the artist to draw directly onto the plate with familiar pens. As early as 1803 André published in London a portfolio of artists lithographs, entitled Specimens of Polyautography.

Senefelder was decorated by King Maximilian Joseph of Bavaria and a statue of him stands in the town of Solnhofen, where lithographic stone is still quarried.

Alois Senefelder's contribution ranks alongside William Ged's invention of stereotyping, Friedrich Koenig's steam press and Ottmar Mergenthaler's linotype machine in its innovative effect. It made printing more affordable and available to more people, and was important in art and newspaper printing. It is fitting that Senefelder lived to see his process become widely adopted both for art printmaking and as the dominant method of pictorial reproduction in the printing industry.