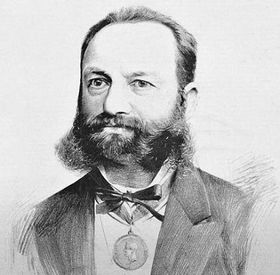 Sylvestr Krnka Breech-loader rifle is the invention of Sylvester Krnka, a czech arm specialist and a supplier of weapons for the National Guard. It was, however, soon after the 1848 revolution, dissolved. Krnka offered to the Austrian army a new type of weapon - a breech-loader rifle. Its breech-bolt opened to the left, it had a short needle and could be handled easily. However he failed in convincing of the Austrian military bureaucrats. Even the catastrophe of 1866, when the Austrian army was literraty decimated at Hradec Kralové didn't help to accept the new rifle.

Krnka's breech-loader rifle So Krnka turned abroad. He has success - the rifles are all equipped the army of Montenegro and Bulgaria are equipped with his rifle, in the Russian-Turkish war, nearly a quarter of a million Russian soldiers shoots from this rifle. The gun is also applied in Sweden, Norway and elsewhere but home. However he continued (since 1871 in Prague) in developing of better and better repeating arms, later with his son Karel Krnka.