Chochola's house The Czech Republic has many claims to fame but one of its greatest and most curious regarding the arts is the country's unique history of Cubist architecture. Czech architects were the first and only ones in the world to ever design original Cubist buildings.

The Cubism in art was born in Paris thanks to Pablo Picasso and was accepted by many Czech sculptors and painters who travelled between Prague and Paris in that period. From 1910 Prague was a very important centre for Cubism and Pavel Janák, a Prague-based architect who had trained in Vienna in that period, was inspired by Cubism. He had been involved in a struggle with then leading architect Jan Kotěra, a proponent of 'rational' architecture. By contrast, Janák thought that architecture should be something that was very creative. 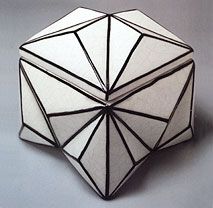 Janák's bowl Until then Janák had been a member of the Manes Association of Fine Artists but he left to co-found the more avant garde Group of Artists and soon began a new publication. In 1911, he wrote "The Prism and the Pyramid", an influential essay outlining Cubist precepts in architecture. In 1911, he sketched crystals from the National Museum's collection of mineralogy and tried to create something like a 'crystalline' architecture with many motifs of prisms and pyramids, very dynamic architecture, closer to Expressionism than the rational architecture of Kotěra's circle.

This style, Cubism in architecture, was accepted by only some people like architects Gočár, Chochola, Králíček and others. And the period was very short because many people were against this new style. Some theoreticians said that it was a 'betrayal' of modern architecture. Of course the buildings were expensive as well as 'bizarre' which is also why much of the public was against it.

Cubist villas were both costly and demanding, given that most of them were made of brick, which is difficult to cut into geometric shapes. Concrete was far more ideal as a material for Cubist construction, since it could be poured into more dramatic geometric forms.

The most famous examples are Otakar Novotný and Emil Králíček's Kovařovic House along Prague's Vyšehrad Embankment,well-known Diamond House with its diamond-shaped motifs along its façade and main portal, a famous streetlamp designed by Emil Králíček, which stands on Jungmann Square.