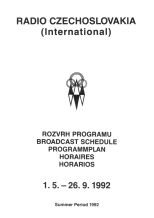 Radio Prague logo on a broadcasting schedule from first half of 1990s At the end of 1989 the Communist regimes of central and eastern Europe collapsed like a house of cards - an end to four long decades of oppressive rule. Both Czechoslovak Radio and the people of Prague played an active role in these events. Democracy had finally arrived.

After the "Velvet Revolution" the most compromised employees and secret service agents left Czechoslovak Radio. Radio Prague gradually returned to its original mission - to provide the world with balanced and unbiased information about events in Czechoslovakia. Programmes once again began with a horn fanfare from Antonin Dvorak's New World Symphony, as they had before the war. From the early 1950s to 1989, Radio Prague's signature tune was the rousing Communist anthem "Forward Left".

From April 1 to May 7 1990, Radio Prague fell silent. Only the Czech and Slovak language expatriate programmes and Interprogram stayed on the air. The reason for this pause was the uncertain position of the international service, combined with programme, personnel and technical cutbacks at Czechoslovak Radio. The Arabic, Italian and Portuguese for Latin America broadcasts had already been cut. Eight languages had been reduced to five: Czech/Slovak, English, German, French and Spanish. The "central departments" - that symbolised the "party line" - were reduced. Programmes were cut back sharply and many staff were laid off. In 1989, Radio Prague had some 360 employees: four years later that number had fallen to just over 50.

Interprogram also faced reductions. In 1990 it cut programmes to just English German and French, and was finally shut down in 1992. In the same year, the central departments were also closed down once and for all. The international service ceased covering international news and began concentrating solely on events in the Czech Republic.

In 1992 a new law made Czechoslovak Radio a public body, and a Czechoslovak Radio Supervisory Board was created to guarantee the station's independence. The Board was appointed by parliament, not by the government or the party apparatus, as had been the case for the previous nearly 50 years. In 1993, following the division of Czechoslovakia and Czechoslovak Radio, the international service became an independent broadcasting body within Czech Radio.

Radio Prague broadcast schedules, with new logo used since 1996 Even the name Radio Prague - which is used to describe the international service in this publication - has an interesting past. It is necessary to distinguish between the internal administrative term used within Czechoslovak Radio and the term used in the programmes: i.e. the name used by the station to describe itself in its broadcasts. Before the war the station introduced itself as "the shortwave Czechoslovak station Praha" or by the transmitter's call sign OLR. After the war several monikers were used in various languages: "Station Prague", "This is Prague - Czechoslovakia", "Prague Calling" etc. The name "Radio Prague" first appeared in the 1950s. It was used in DX programmes, and several language sections began using "Radio Prague - Czechoslovakia" as a call sign. The name "Radio Prague" was used mainly in written correspondence with listeners, and can be seen on various broadcasting schedules, QSL cards and other printed material from the 1960s. It was not, however, used universally. It was not until the 1990s (in the early 90s the station was called "Radio Czechoslovakia International") the name Radio Prague stuck for good. As for internal administrative use within Czechoslovak Radio, before the war the station used the words "shortwave department", after the war "shortwave broadcasts", from the 1950s "the foreign language broadcasts", or ZV for short. In 1996, when Czech Radio stations were given Despite all the technological advances of the last few years, shortwave remains the new names, "Radio Prague" became the name used both internally and externally. The station's official name is "Czech Radio 7 - Radio Prague". On air, presenters use the phrase - "Radio Prague - the international service of Czech Radio".

Radio Prague also has its own methods of financing. While Czech Radio is funded by the licence fee, the international service is financed from the state budget. From 1993-1996 funding came from the Office of the Czech Government; since 1997 Radio Prague has been financed via the Foreign Ministry. In 1994 the government announced a tender for operating the international service. Not surprisingly, this was won by Czech Radio. Radio Prague's "foundation charter" is an agreement between Czech Radio and the Foreign Ministry, in which the extent and form of broadcasts and financing is laid out in full. The budget for the international service fell from 90 million crowns in 1993 to 45 million in 1997. In 1997 there were further cuts planned. All shortwave broadcasts were originally to be closed down with the exception of the Czech and English services; other language services were to be available only via the Internet. Luckily this plan was never realised. In 2000 the budget was raised to 62 million crowns (1.5 million USD) and Radio Prague was able to launch a Russian service.