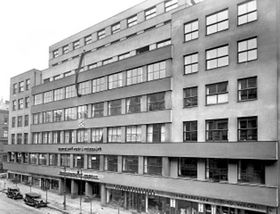 Czechoslovak Radio building, 1930s When Guglielmo Marconi carried out the first successful long-distance transmission and reception of radio signals in 1895, he must have had little idea of the importance of his invention. Twenty-five years later radio ruled the world.

The first attempts at radio broadcasting in Czechoslovakia began before the First World War, and continued after the war ended. The first radio programme, made up of words and music, was broadcast on October 28th, 1919 from the telegraph station at Prague's Petrin lookout tower. Regular radio broadcasts began on May 18th 1923, from the now legendary tent in Prague-Kbely, and at first lasted just one hour per day. All the programmes - news and musical productions - were broadcast live. The country's broadcasting pioneers were the journalist Milos Ctrnacty, the businessman Eduard Svoboda, and Ladislav Sourek, director of Radioslavia - the company that distributed radio receivers. These three men created a company called Radiojournal, which was majority owned by Radioslavia. Radiojournal became Czechoslovakia's first radio operator after receiving permission from the Interior Ministry and the Ministry of Post and Telegraphs. In the beginning it was difficult to find licence payers, and capital es- sential for developing the broadcasts was also lacking. The situation gradually began to improve, but in 1925 the state gained a majority share in Radiojournal via the Ministry of Post and Telegraphs. 1924 saw the first appearance of the Czech equivalent of the word "broadcasting" ("rozhlas"), which began to replace such expressions as "radiophony", "wireless telegraphy and telephony" and even the English expression "broadcasting".

In 1924 Radiojournal moved into a building owned by the post office at 58 Foch 4 Street in the centre of Prague. The station has remained in the same street to this day, and in 1933 was given a permanent headquarters at 12 Foch Street (today's Vinohradska Street). The building, called the "Radio Palace," was built by the Post and Telegraphs Ministry, which shared the building with Radiojournal until 1945. From the beginning the facade bore the inscription "Czechoslovak Radio", even though the official name was "Radiojournal - Czechoslovak Radiotelephone News, Limited Liability Company."