Velvet at the Film School 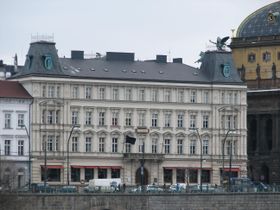 FAMU Radio Prague and FAMU - Prague's celebrated film school - invite you to a discussion in English with some of those who were at the heart of the Velvet Revolution, to examine the legacy of the revolution 20 years on.

The film school was one of the focal points of the dramatic events of November 1989, so it makes an apt backdrop for a discussion with some of those who played a central role in those events. Guests include Václav Bartuška, who was the first person to be given access to the secret police files after the fall of communism, and Jiří Stránský, who survived years in the Stalinist gulags. The dean of FAMU, Pavel Jech will also take part, along with student activists from the time of the revolution. And we'll be asking representatives of today's student generation whether student activism is still alive and well in the Czech Republic.

Space is limited, so do try to arrive early.

The entire discussion will later be made available in audio on Radio Prague's website (www.radio.cz), and highlights will be broadcast by Radio Prague on November 17, exactly 20 years after Czechoslovakia's revolution broke out.