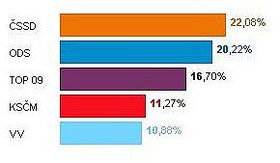 Elections to the lower house of the Czech Parliament took place on May 28 and 29. Social Democrats gain most votes but centre and centre-right parties get majority of seats in lower house. The final elections results gave the left of centre Social Democrats most votes with 22.1 % followed by the Civic Democrats on 20.2 %, according to the Czech Statistical Office. The recently created TOP 09 party was third with 16.7 % followed by the Communists with 11.3 % and the Public Affairs party with 10.9 %. The Christian Democrats and the party of former Social Democrat prime minister Miloš Zeman were both just under the 5.0 % threshold to entry to the lower house with around 4.5 %. The turnout was 62.6 %.