The Easter table isn't given as much significance as that of Christmas, but there is still food, particulaily baked goods, prepared especially for this holiday as well. Just as fish, particularily carp, is associated with the Christmas feast, lamb and goat's meat, baked or fried, is associated with Easter. It was normally prepared with potatoes.

To this day, however, Easter just isn't Easter without mazanec (hot cross buns), which is the Easter equivalent to Christmas's vánočka. It's made from the same dough, but it has the shape of a bun, on the top of which a cross is carved before baking. Another traditional Easter bread is the Easter Ram, which is whipped dough poured into the shape of a sitting ram or lamb. After baking, the ram is given eyes - two cloves poked into the dough. Today, of course, chocolate eggs, chocolate bunnies and hard-boiled eggs have also become a part of Easter. 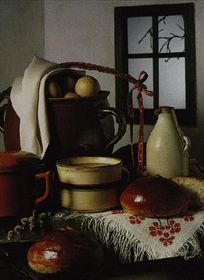 Photo: CzechTourism Even before the days of Christianity the symbol of the lamb was widespread in Mediterranean culture, with its long pastoral tradition. For Christian churches the lamb came to symbolize the Lamb of God - Jesus Christ. In the southern Czech Sumava Mountains there used to be a tradition that blessing a lamb would help wayfarers to find their way through the forests. These days lamb is rarely eaten in the Czech Republic, but this does not mean that lamb has disappeared completely from Czech Easter celebrations. It still appears in the form of a cake.

Judas bread was traditionally made with yeast dough and took the form of braided rope, symbolizing the rope on which Judas hanged himself after he had betrayed Christ. Baked Judas bread was eaten with honey, which traditionally was said to give protection against being stung by a bee or bitten by a snake.

Easter stuffing is a great Czech tradition, with many variations in different regions. It can be made with smoked meat, sometimes with pork and sometimes with veal. The stuffing also includes plenty of egg. As a spring dish it also needs something green - in the form of nettle, garden lovage (levisticus officinale), parsley or chive. The stuffing also includes breadcrumbs, milk and herbs. It is traditionally eaten on the evening of Easter Saturday.

Ingredients:
6 cups of medium flour
9 teaspoons of sugar
4 ounces of butter
1 tablespoon of yeast
1 cup of milk
1 yolk
a pinch of salt
vanilla sugar
a lemon rind
a nutmeg nut
star anise
3 tablespoons of raisins
3 tablespoons of almonds
an egg for the icing

What to do:
Crumble the yeast into the room-temperature milk, add in 1 tablespoon of sugar, sprinkle evenly with flour, and then leave it in a warm place to rise. Put the rest of the flour, 8 tablespoons of sugar, the vanilla sugar, a pinch of salt, the lemon rind, the grated nut of nutmeg, one egg yolk, and the grated star anise into a bowl with the previous mixture when well-risen and mix well. After this, add in the softened butter and continue to mix well. When the dough no longer sticks to the side of the bowl, stir in the washed raisins and the cleaned, sliced almonds. Shape the dough in the bowl into a smooth loaf, dust it with flour, and leave it covered in a warm place to rise (with a larger amount of dough even all night.)

With the risen dough, form two small loaves and place these loaves on two different pieces of greased paper, so each may be rotated during baking as necessary. Leave the loaves on the baking sheet to finish rising. Then, before putting them in the oven, baste them with the whipped egg, sprinkle them with the chopped almonds, and carve a cross on the top of each with a sharp knife. Reduce heat and bake for about 45 minutes.

You will also need a cake form in the shape of a lamb!

What to do:
Mix the yolks in a bowl with the sugar, add the vanilla sugar, a little grated lemon peel, sliced almonds and raisins. Mix in the flour, stir together and add the firm whisked egg whites. Grease the cake form, fill with the mixture and bake in a warm oven. When the cake is ready, sprinkle with caster sugar or pour on the icing.

Icing:
Stir the caster sugar, egg white and lemon juice until they thicken, then pour on the baked cake. 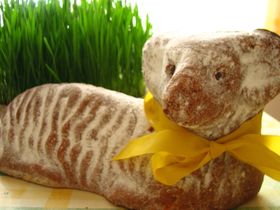 What to do:
Mix the flour, salt, sugar, and lemon peel, add the butter and the yolks mixed to a froth. Make a yeast dough with the milk and yeast, add to the other ingredients and knead the dough until soft. Leave the dough to rise. Cut it into pieces and roll into strips. Braid into spirals, place on a greased baking tray and again leave to stand for a while. Then brush on the egg yolk and bake in a hot oven. When cold, cut into slices and spread with butter and honey. Alternatively honey can just be poured on top of the Judas bread. 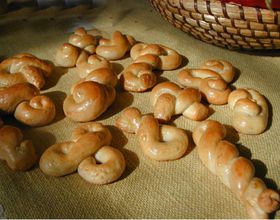 What to do:
Cut up the bread into cubes, add milk into which the yolks have already been whisked, and leave to stand. Boil the pork and the smoked meat separately, and cut into small pieces once cold. Chop up the herbs, first scalding the nettle with hot water. Mix the bread, meat and herbs, add a little salt, pepper and nutmeg. Whisk the egg whites until they are firm and add to the mixture. Place the stuffing evenly into a greased roasting pan, put some butter on top and bake until golden. Can be eaten both hot and cold. 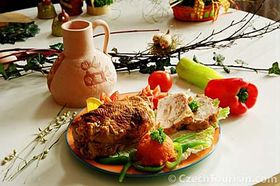 
Back to the Homepage