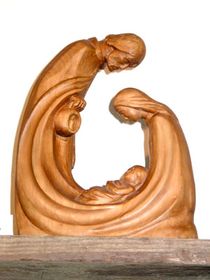 The winter holidays, which climax with Christmas Eve, begin with the season of Advent, which is actually a period of preparation for the Christmas holidays. Advent is a latin word which means coming or arrival. Advent lasts for four Sundays, recalling the four thousand years in which humanity awaited the arrival of the Redeemer. For Christians, Advent is a time of pennance and religious reflection, and believers would fast during this period in the past, eating eggs, milk, cheese and fish in place of meat. This fasting and atonement preceeded the abundance, plenty and merriment of the Christmas holidays. After St. Lucille's Day, the last holiday of Advent, began the preparations for the celebration of Christmas - the biggest holiday of the year, when the birth of Baby Jesus is celebrated.

Although it might seem as if these holidays would have always been connected to Christianity and the Catholic Church, this wasn't necessarily so, and in fact they weren't added to the Church calender until the year 336.

The history of the Christmas holidays dates back to the times before Christianity, when, in the time of the most beautiful winter days and the longest winter nights, demonic powers were matched against the Sun and the Sun seemed beaten. For this reason our predecessors who worshipped the Sun had great reason to celebrate the arrival of the Winter Solstice, when the nights began to shorten again and the dark powers fell back before the might of the Sun. Even the ancient Romans celebrated the Winter Solstice.

The basis for the Christian Christmas was the biblical story of the birth of the Savior, Jesus Christ, and the celebration of this occaision. These Christian celebrations were joined to pagan myths - the Church connected the birth of the Heavenly Child with the arrival of the Winter Solstice, the expression of the triumph of Light over Darkness. It also re-evaluated pre-Christian symbols, which were changed into Christian symbols with different meanings. Under Church influence, the Saint's Days acquired a religious content, issuing from the Gospel.

For about the first 300 years of the Christian Era, the Christians didn't celebrate Jesus' birth with a specific holiday, due to the cruel persecution inflicted on them by the Romans. Not until the Emperor Constantine proclaimed religious freedom with the Milan Edict in 313 were the Christians able to celebrate the holiday of the birth of Jesus Christ.

Until the 17th century, the celebration of the Christmas holidays took place in church, where Nativity scenes were displayed and Christmas Mass was held. Canonical Christmas plays were also performed in the local churches. In the Baroque period, these liturgical plays were increasingly performed by students, who would occasionally insert scenes too secular for the Church, and so the plays were removed from the churches. Without the churches to perform in, the students began taking their plays from house to house, and so began the custom of carolling. 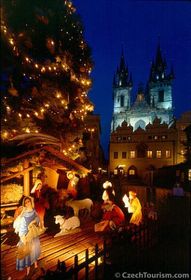 In the 17th century, the celebration of Christmas moved from the church to the home, where the observation of the birth of Christ was imbued with the veneration of familial success and togetherness. For Christmas also marked the return of the Sun, which was connected with concern for the security of future crops. For these reasons, Christmas Eve comes with a large amount of Christmas Eve customs and practices, and even the Old Czech Christmas Eve menu has its symbolism.

In the 19th century, a Christmas tree appeared for the first time in the Czech Lands.

In the 19th century, Christmas became more and more of a secular holiday. After the Second World War, the holiday became even more secular in the Czech Republic due to the Communists, who as atheists couldn't let a religious holiday stand. But they failed to replace Baby Jesus, who brings presents to the children, with Grandfather Frost or to move the celebration of Christmas Eve to New Year's Eve in the former Czechoslovakia, as it was in the Soviet Union.