Czechs begin preparing for Christmas early, preferably by the middle of November, at which time they already have money saved that they want to spend on Christmas. This is when the shops begin luring people in with their window displays, mailbox flyers, and commercials on all the television stations to help further the pre-Christmas madness. 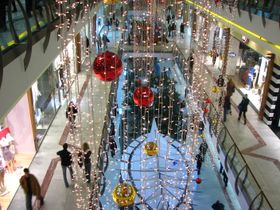 And then questions like "Have you done your Christmas shopping yet?" get even the most stubborn Christmas-haters into the shops. Not only are the shops full of people buying gifts for their relatives, but also people buying ingredients for making sweets at home. After all, nothing can make the atmosphere at home cozier than a big bowl of calorie-filled sweets on the table.

Preparations for the Christmas holidays mostly get underway for Czechs with a good house-cleaning. The whole flat or house is cleaned from top to bottom: the carpets are washed, the furniture polished, and everywhere vacuumed, even under the beds and cupboards. In the November or December cold, you can see housewives (yes, mostly women) leaning out their windows, giving them their annual pre-Christmas cleaning. 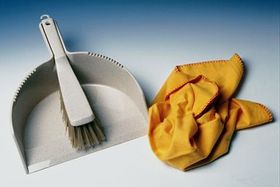 In recent times, Czechs have begun placing other objects that symbolize Christmas in these nice, clean windows - lit Christmas stars bought in the shops or artificial wreaths.

After cleaning their home completely, people begin slowly bringing in supplies and gifts for Christmas. They hide them in their cupboards and other hiding-places, so their family members don't accidently find them and ruin the surprise on Christmas Eve. This is when parents ask their children to write a letter to Ježíšek (Baby Jesus), to tell him everything they want to find under the tree on Christmas Eve.

From the beginning of December, the attractive aromas of Christmas confectionery begin emanating from Czech kitchens. Even if more and more Czech housewives lack the courage to bake a vánočka Christmas loaf, baking Christmas sweets at home remains a Czech speciality. The more types of sweets on the table during Christmas, the better. The custom was that the children would help their mothers, who often weren't looking forward to the baking and considered it a necessary evil and an inseparable part of the holidays. 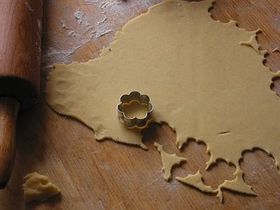 The custom was also that the children, along with their fathers, would steal the sweets before Christmas from the box where their mothers had put them for safe-keeping. Another rule was also that housewives and grandmothers would bake even more kinds of sweets to get a headstart on them. The results of all these actions can be seen in extra weight around the middle after the holidays...

Neither the house-cleaning nor the cooking compares with the suffering endured in all the lines and queues in the department stores and other shops. People from the countryside come into larger cities or Prague, along with people from the larger cities and towns. The most common spot for Christmas shopping is still the Prague department stores. Everyone is affected by the pre-Christmas madness, although this only partly excuses 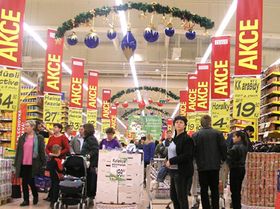 how rude and unfriendly they are to each other in the shops. This nerve-wracking atmosphere is only worsened by the behaviour of the shop clerks, who only grudgingly aknowledge customers, and that's not just during Christmas. There are people, on the other hand, who love this Christmas chaos. They're called pickpockets, and thanks to the carelessness of dazed shoppers, they're out helping themselves to the gifts in other people's pockets and bags long before Christmas Eve. So be careful. 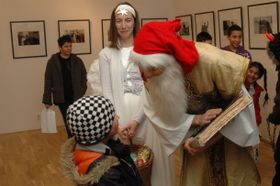 In the midst of these holiday preparations, the parents of small children have the holiday of Mikuláš (St. Nicholas Day) to look forward to. It's celebrated on the eve of the day in his honor, thus on the fifth of December, and is the only one of the old Czech advent holidays to still be celebrated. So every year on this night, the streets are filled with devils rattling chains, St. Nicholases with white cotton beards, long white robes and bishop's staves, and angels with paper wings, coming to see small children to give them a scare before giving them sweets, and then drinking a toast with their parents. Advent also brings with it advent concerts, which are often connected with collections for a charitable cause.

In this pre-Christmas hustle and bustle, people should still think of all their friends and relatives, and remember to send out their Christmas greetings for them. The design of these Christmas cards varies every year, but among them are always cards featuring the Czech artist Josef Lada. These are typical Czech Christmas greetings and people send plenty of them.

The closer Christmas gets, the more everyone realizes what they still haven't gotten done. Mailing Christmas cards, buying that gift for Auntie, making those special rum balls, picking out a Christmas tree. Yet another event in the pre-Christmas obstacle course. Christmas trees can be bought in most town squares and other open spaces, and every year they get more expensive. Inflation, of course, and it becomes so much more obvious around Christmas, when you see something which you clearly remember being much cheaper last year! Various qualities of trees are sold, but suffice it to say that the better the quality, the thicker the tree. The most expensive are fir trees, followed by pine and then spruce trees, and then the person selling the trees determines the price by its height. Some people choose the artificial Christmas tree, which won't start dropping needles around New Year's, but is hardly in the spirit of "true" Christmas. Most Czech families keep their trees out on the balcony, where it remains until Christmas Eve. 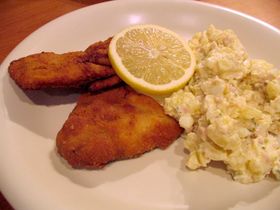 And then comes the last day of work before the Christmas holidays! And of course this can only mean office parties to celebrate the upcoming escape from work. If you manage to get through this Christmas tradition unscathed, you can jump out of bed on the morning of Christmas Eve and begin to savor the atmosphere of the holidays with those near and dear. The most important day of the Czech Christmas celebration, the 24th of December is naturally as idyllic for adults as it is for children, who have a day full of traditional Christmas fare to enjoy.

The Christmas television schedule is more or less the same every year. Fairy tales - old ones such as Pyšná princezna (The Proud Princess), Princezna se zlatou hvězdou na čele (The Princess with the Golden Star on her Brow), Obušku z pytle ven (Take the Club from the Sack), and then the newer ones like Šíleně smutná princezna (The Terribly Sad Princess), or Tři oříšky pro Popelku (Three Nuts for Cinderella). There's also no shortage of old Czech and foreign comedies, such as the film Babička (Grandmother) or the musicals My Fair Lady and Mary Poppins.

In the afternoon, the Christmas tree is decorated, with whatever ornaments are in fashion at the moment. While in the 1980's the popular decorations were glass ornaments of various shapes and sizes, artificial colored candles, and chocolate figures from work, 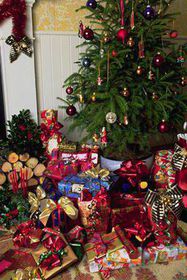 which adults received free from the socialized firms as a Christmas "bonus" from the state, recently the preferred decorations have become natural ornaments - red apples, walnuts, gingerbread, straw or wooden figures and classical candles. Naturally, it depends on the family what they hang on their tree - whether "socialistic" ornaments, natural ones, or even "imported" decorations in the Western style.

People should wait until evening on the 24th to eat any meat, and must be satisfied with the traditional Czech lunch of lentil soup and cucumber, in order to see the golden pig on the wall symbolizing prosperity. Meanwhile, mothers are busy preparing the Christmas Eve feast - potato salad, wrapped carp cutlets - cook fish soup, and some even bake a vánočka. The parents see to the presents, and if they haven't wrapped them all, then this is the time to take care of that. And they can't forget to hide them somewhere, preferably somewhere locked, so nobody ruins their Christmas surprise, or worse, that small children might be deprived of the illusion that their gifts are brought by Baby Jesus.

The Christmas Eve dinner is usually attended by the whole family, including Grandma and Grandpa, as being alone during Christmas is considered one the most painful things there is. People are trying to be considerate to each other, but sometimes it happens that all the built-up stress from the pre-Christmas preparations boils over right on Christmas Eve and family members begin to argue over trifles, like burnt food or a missing gift. Comments like "this is the worst Christmas ever" and "I hate Cristmas" will be heard, as always. But Christmas is such a big holiday that people compromise in the end and sit down at the Christmas table together. Now the Christmas gluttony starts, that time we all know well, when the resolution not to eat so much gives way before the plenty of the Christmas table, and we end up overeating just like the year before. With the Czech Christmas menu, however, there lurks the added danger of getting a carp bone stuck in your throat. No one wants to be one of those unfortunates who spend their Christmas Eve in the emergency room, as people do every year.

After dinner, the family leaves the room where the Christmas tree is, so that Baby Jesus can come and leave the presents under the tree. (So the little children are told.) But in reality, the father, typically, or grandfather stays in the room to place the gifts arond the tree and then ring a little bell... And then it's the moment everyone, big and small, has been waiting for: unwrapping the presents! Everyone has a good time, or if anyone doesn't at least they pretend to in order not to ruin it for the others. After everyone has gotten what they desire most, the whole family snuggles down in front of the television for the Christmas programs. Before midnight, some people tear themselves away from the television screen and go to church for Christmas Mass. This service attracts many people who never go to church during the rest of the year. In a lot of chuches, Ryba's Czech Christmas Mass is an integral part of the ceremony.

After Christmas Eve come two more holy days of celebration. On St. Stephen's Day, the 25th of December, people largely pay each other visits, and of course feast, watch television, go on walks or just get some well-deserved rest after the strain of all their Christmas preparations. Then they can slowly start to look forward to next Christmas, as they say: "Next year I won't overeat so much. I promise."