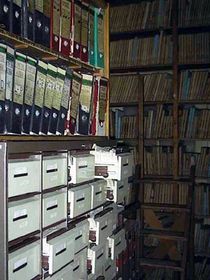 In the 85 years of its existence, Czech Radio - and prior to 1993 Czechoslovak Radio - has accumulated a huge wealth of archive material. The sound archives were first established when we were still known as Radiojournal in the mid-1920s and they have been building up ever since, surviving world war and invasion, and even a Luftwaffe aerial torpedo at the end of World War Two.

Prague has been at the centre of many 20th century dramas: the Munich Crisis of 1938, the German invasion of March 1939, the Prague Uprising of 1945, the Communist putsch of 1948, the Soviet-led invasion of 1968 and the Velvet Revolution of 1989. All these events are captured vividly and movingly in the archives, as are the voices of some of the most influential figures of the last 80 years. We have Czechoslovakia's first President, Tomáš Garrigue Masaryk, the great German novelist, Thomas Mann, Albert Einstein, Dwight Eisenhower, Louis Armstrong, Josephine Baker, Herbert von Karajan, to name just a few.... There are also some fascinating curiosities, such as some of the earliest ever live sports reports, a Dvořák opera sung in Esperanto and an experimental 1960s English-language adaptation of Karel Čapek's "War with the Newts".

What may come as a surprise is that the archives include so many recordings in English, some dating back to the early 1930s, before Czechoslovakia had even launched its first regular English shortwave broadcasts.

Czech Radio houses one of the richest radio archives in Europe, but most of the recordings are only rarely - if ever - heard. In this series, we bring you some of the most interesting recordings from the collection.