On August 31, 2011, it will have been 75 years since the Czechoslovak company Radiojournal launched its regular shortwave broadcast. We consider that day to be the beginning of Radio Prague. To mark the anniversary, Radio Prague will be doing some special programmes and preparing the following events.

An exhibit covering the past and present of Radio Prague is installed on the ground floor of the Czech Radio building on Římská 13, Prague 2, from June 23. 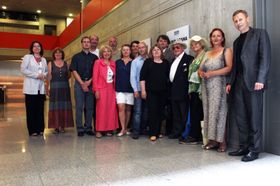 A Czech Radio 7 tent will be set up at Na příkopě 15, Prague 1, from 10 a.m. to 6 p.m. The staff at the tent will be distributing Radio Prague promotional materials and will be drawing attention to the Prague broadcast for foreigners on 92.6FM and 99.3FM. There will also be live broadcasts from the tent.

Those who tune in to the Radio Prague broadcast on August 31 will receive a special, stamped QSL card.