The Second World War, a conflict which involved most of the states in the world, cost more than 60 million lives and was the largest and most destructive war in human history. 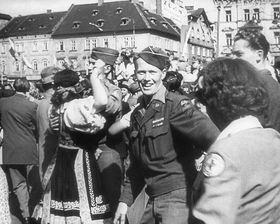 Liberation of Plzeň, photo: Czech Television Prague and the whole of the Czech lands had been occupied by Germany from March 1939. It took more than six years until, on May 9, 1945, the Czech capital became the last of the major European cities to be liberated. In between that time, Bohemia and Moravia had been controlled by a puppet government known as the "Protectorate" installed by the Nazis.

Czechs fought against the Nazis on the Eastern and Western fronts, as well as at home during the war. The 75th the anniversary of its end is also an important occasion on which to commemorate the extermination of 70,000 Czech Jews, the many mass executions and the destruction of the Lidice and Ležáky villages by the Nazis.

Every year, Czechs remember the fallen and celebrate the country's liberation through a series of commemorations. Just as in most other European states, May 8, when Nazi Germany signed an unconditional surrender with the allied powers, is celebrated as a national holiday in the Czech Republic. However, this year, celebrations of the liberation and the end of war will not take place. The international coronavirus pandemic is a memento, but it is all the more necessary to remember the causes and impact of this most destructive of world conflicts. Let us therefore go back into history and recall the most important events of the liberation of Prague that continue to resonate in society 75 years later.

May uprising: Radio calls for help

Czech Radio’s broadcasts from its building in Prague's Vinohrady can be seen as a definitive shift in the process of liberating the Czech lands. They became the turning point in the events that began in the city with the Prague Uprising and the wider uprising of the Czech people across the country.

We are calling on the Czech police, Czech gendarmes and the government's military forces to help Czech Radio!

This request for help was the first call for a mass showing of opposition by the public to the German occupiers across Bohemia, Moravia and Silesia. In response, individuals began gathering weapons and the whole city joined the fight.

The defenders of the Czech Radio managed to hold the building throughout the battle until the Red Army entered the city on May 9, despite facing sniper and artillery fire. On the evening of that day, the building began broadcasting again as Czechoslovak Radio.

Some 168 radio employees, Czech policemen and resistance fighters died defending the main building of Czech Radio on Vinohradská street. The bravery of the defenders is annually commemorated. This year will be the first time that the yearly memorial act will not take place. Let us therefore remember the bravery of these defenders of freedom with photographs of last year's commemoration.

Celebrations of the liberation of Pilsen by American troops have been an annual event in recent years. This year they can only take place virtually.