Miloš Zeman and Karel Schwarzenberg have emerged as the strongest candidates from the first round of the Czech presidential election, and are heading to a runoff for the top post held in two weeks’ time. A former Social Democrat prime minister, Miloš Zeman picked up over 24 percent of the vote while Foreign Minister Karel Schwarzenberg surprisingly came in close second. 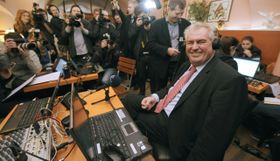 Miloš Zeman, photo: ČTK After a strong campaign finish, Foreign Minister Karel Schwarzenberg took 23.4 percent of the vote in the Czech presidential election’s first round on Friday and Saturday, less than one percent behind the frontrunner, Miloš Zeman. Mr Schwarzenberg surpassed Jan Fischer, who polls predicted would reach the run-off. But he only gathered some 16.3 percent to came in third. The turnout at the polls reached 61.3 percent.

Mr Zeman, who served as a Social Democrat prime minister between 1998 and 2002, had been favoured by the polls to win the first round. Detailed voting results show he did best in eastern regions of the Czech Republic and in the countryside. Meanwhile, Karel Schwarzenberg won in Prague and other big cities and five Bohemian regions. 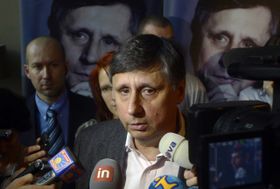 Jan Fischer, photo: ČTK Jan Fischer, whose support declined following a series unconvincing debate appearances, said people decided to support party candidates rather than independents. “I still believe the Czech Republic needs change. I was running to give people hope that they can have decent lives,” Mr Fischer said, and refused to take any questions from the media. 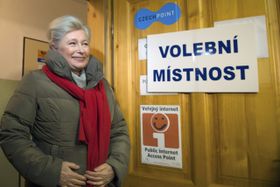 Prime Minister and Civic Democrat leader Petr Nečas, who appeared at a news conference alongside his party’s candidate, said the result of the first round was disappointing, adding that Mr Sobotka was hurt by the media which backed the charming foreign minister. Meanwhile, the Civic Democrat candidate himself asked his supporters to vote for Mr Schwarzenberg in the second round, as did Zuzana Roithová. 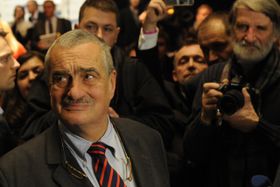 Karel Schwarzenberg, photo: ČTK The two frontrunners, Miloš Zeman and Karel Schwarzenberg, quickly exchanged barbs on Saturday afternoon. With some 90 percent of the votes counted, Mr Schwarzenberg, who is 75, appeared in front of his campaign team and a crowd of supported at a Prague theatre, calling his rival “a man of the past”. Mr Zeman returned the punch shortly afterwards noting the foreign minister supported some controversial moves by the government in which he serves as deputy prime minister.

Most commentators expect a tight race between Mr Zeman and Mr Schwarzenberg in the runoff. While Miloš Zeman might win over additional votes by emphasizing his rivals role in some of the government’s unpopular policies, Karel Schwarzenberg could try to convince voters his opponent’s past disqualifies him for the post. Much will also depend on whether those who voted for Jan Fischer and Jiří Dientsbier will come to the polls in the second round, and whom they will support there.