Czech MPs have voted to dissolve the lower house, triggering early elections. Deputies from the Social Democrats, the Communist Party, TOP 09 and some smaller groupings raised their hands for the motion, which was carried by 140 votes, exceeding the necessary three-fifths majority in the 200-seat lower house.

Photo: CTK The Civic Democrats absented themselves from the Chamber of Deputies when Tuesday’s vote was held, saying the dissolution of Parliament would prevent the approval of important legislation. It was the first time that the Czech lower house had voted for its own premature end.

Under the constitution, early elections now have to be held within 60 days of President Miloš Zeman formally dissolving Parliament. The president has indicated that he would like to see the nation go to the polls on October 25 and 26. 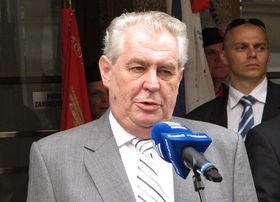 President Miloš Zeman, photo: Kristýna Maková A caretaker cabinet appointed by Mr. Zeman is serving in demise, after failing to win a confidence vote last week. The president installed the interim government in the wake of the collapse of the previous right-of-centre government headed by the Civic Democrats’ Petr Nečas.