Jaroslav Rudis and a question of teeth

If you listened to Czech Books on Sunday, you'll know that the popular young Czech writer Jaroslav Rudis is something an eccentric - with an inexhaustible passion for trains. But, in a country where beer-drinking is a profound cultural phenomenon, Jaroslav - like so many Czech writers before him - also finds inspiration in the pub, engaging with the various characters that prop up the bar. For Witness today, Jaroslav tells a story from one of his more recent visits to a Prague pub. 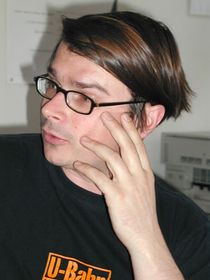 Jaroslav Rudis "I like to steal stories. That's why I go to the pub so often. Last time when I was in a pub in Zizkov - a working-class district of Prague - there's a pub called "U vystreleneho oka" and I was listening to four homeless people there. They were discussing how many teeth a man needs to live. They were drinking beer and one said that you don't need teeth at all if you can live from beer. I think that many Czechs believe that we definitely can live from beer. They were counting and counting and because one of these guys had teeth that were totally rotten, he was showing us his teeth and counting, and then he decided that tomorrow he would go to the dentist, that he needs only four teeth to survive, because he is actually drinking more than eating. But I met him one week later, and he still had his old rotten teeth. And he said to me and to the other people in the pub that when he went to the dentist, he was so shocked by the fact that he should sit there for two hours, and he was so totally afraid of the pain, that he decided that maybe it will be better if the dentist is nature, and he will wait for his teeth to fall out."

Microbreweries are among the businesses hardest hit by the coronavirus lockdown in the Czech Republic. Due to the closure of restaurants,…