Czechs bracing themselves for weather extremes

With recent weather forecasts predicting droughts and risk of fires, it can be easy to forget that this month five years ago Prague was hit by one of the most disastrous floods in its history. Experts warn that Czechs should brace themselves for more weather extremes in the future - claiming that floods and droughts are actually two sides of the same coin. They have been discussing for some time now how to protect the landscape against flood waves and keep enough water-supply at the same time. 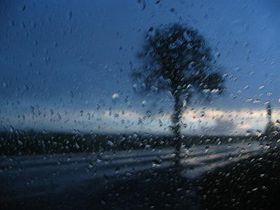 "Scenarios of the climate change indicate that after thirty to fifty years there might be a situation when hydrological cycles will change substantially. The amount of precipitation might be the same but the time distribution will differ substantially: during the winter and early spring high amount of water out-flowing very quickly and during winter and summer deeper and longer drought period."

Pavel Puncochar, head of the Water Management Department at the Ministry of Agriculture, is well aware of the consequences that global climate change may bring to the Czech Republic: that is sudden heavy rains as well as longer periods without a single raindrop. That's why he has been outlining a plan reserving territories for future construction of dams, which could hold up enough water for emergencies.

"At the moment, this plan, prepared according to the Water Framework Directive of the EU, is not in fact planning the building of new dams but the protection of areas where such dams and reservoirs might be established. These areas are very specific and rare due to geology, the shape of the valley or hydrological regime. We have to recalculate and resolve the proposal but I would still stay on the amount of 140 or something like that to keep these areas for possible accumulation and increasing the water resources for the future generations of this country."

The plan outlined by Mr Puncochar has caused strong reactions among some experts. Zdenek Postulka, hydrology expert from the environmental group Hnuti Duha, is not entirely against the construction of new dams, if their purpose is to secure drinking water, which would otherwise be unavailable. He doesn't agree, however, with using dams as a form of flood prevention.

"That's the old-fashioned approach. It isn't possible to solve the problem by building dams. The roots of the problems are poorer retention capacities of the landscape. Of course it is possible to cure the symptoms by building dams but still we have to find the most efficient and the cheapest measures to solve the problem. And the building of dams is the last method. We have to start with nature-friendly methods and the cheapest methods, which is restoration of landscape." 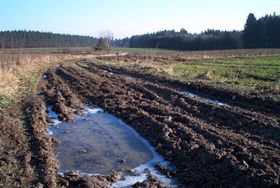 According to Postulka, Czech water management authorities still haven't learned to cooperate with foresters and farmers and they don't respect modern methods of river and flood plain restoration. His prescription to the problem of climate change is to restore the countryside, which was modified by people during the previous centuries and especially during the Communist era.

"We have altered our countryside during the last centuries. It means our agricultural landscape cannot hold water. Our forests are not capable of retaining all the rainwater. Another problem is that we have built up our flood plains and we are still protecting arable fields in the floodplains and there is only slight will to open the floodplains to decrease the flood wave."

Biologist and ecologist Jan Pokorny specializes in the restoration of lakes, which, as he says, is inseparable from the restoration of landscape. He advocates the so-called "natural air-conditioning" as a method of bringing back water that has been drained from the landscape by various forms of human intervention:

"We prefer functioning, that means man-managed landscape in which water and nutrients recycle. There is a so-called drainage paradigm, where the hydrologists speak about evaporation losses. Water that evaporates is according to drainage paradigm lost for dams. But we need water to evaporate above continents because the vegetation and water is the perfect air-conditioning system. When we lose water from the surface, then we lose an 'air-conditioning' system. When we remove water and vegetation from landscape, then we disturb the air-conditioning."

Ecologists argue that dams violate the natural continuum of the rivers: If a dam is built upstream of a river, it causes the river to lose its dynamic further down the stream, eroding the river-bed and destabilising other parts of the countryside. Jan Pokorny again:

"The natural stream meanders and goes through the floodplain where it can discharge water in areas. When we make deep, straight ditch, then the water flows down very fast. In this country in the Czech Republic we did it in former decades in thousand of kilometres. First we should use capacity of the flood-plains and then when we bring back water and vegetations in surfaces we can expect that heavy rains will not be so often as now." 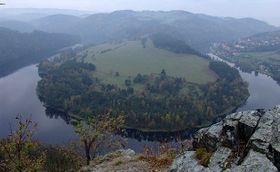 Pavel Puncochar from the Ministry of Agriculture is familiar with his colleagues' arguments but he is quite certain future will prove them wrong:

"Yes, they are sharply against, because all the cross-sectional constructions along the water courses are not supporting the normal flow-rate regime and normal so-called river continuum, which is somehow interrupted. But I would say that the future possible shortage of water and occurrence of drought might change the meaning general public but also of ecologists."

Mr Puncochar is not against the idea of land restoration as such. However, he has some doubts about its feasibility and efficiency. He agrees it is necessary to increase water in the landscape and in the soil profile but he questions if this can be sufficient to cover the need for water supply. 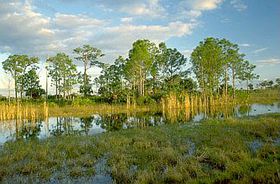 "My friend Mr Pokorny from South Bohemia is in fact showing this possibility: that the more green around, more evaporation through the plants might change climate. This is very true if large territory accepts this theory. This is very problematic in Europe. I wouldn't like to say that this is a mistake - no. If a big part of Europe is covered by forests or green then the climate regionally on the relatively large area might change. But this is usually not the case."

Both ecologists and hydrologists agree that due to the EU funding and cooperation with other European countries, which are facing similar problems, things have started moving in the right direction. Both sides are ready to make compromises in order to find a joint solution to the problem. One such concession may be construction of smaller reservoirs instead of large dams. And we certainly don't need to travel far-away for inspiration.

"In our country we have a tradition of fantastic water management - the pond-systems. Now I speak from Trebon, which is a region, where on six hundred square kilometres we have about ten percent of the surface covered by large artificial lakes or ponds. They were constructed five or six hundred years ago and this is a way of how to keep water in landscape. There is evidence that during the floods five years ago these ponds stopped the flood water and they really partly saved Prague and other big towns."