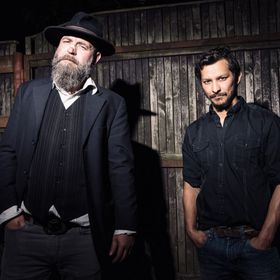 Nylon Jail, photo: archive of Nylon Jail Olomouc-based independent band Nylon Jail display their ability to rock out to the full on their latest LP, Irreversible Changes. On the record core members Jiřin Jirák and Roman Vičík (who split up a few years ago, only to reform) are joined musicians from the groups OTK, Priessnitz and Muff, as well as a girls’ choir. Nylon Jail were due to play on the Radio Wave stage at Prague’s Metronome music festival on Saturday as one of the contenders in this year’s edition of the Czeching competition. Khoiba: "on the edge" of multiple genres

Khoiba are known for melding electronics and melodic guitars in combination with downtempo rhythms. They released an eponymous LP last…

Jan P. Muchow: In Ecstasy of St. Theresa we didn't appreciate the opportunity we had

Born in the then East Germany, musician and producer Jan P. Muchow (48) moved to Prague with his family as a small child and in his… B4 have been around in different forms for over two decades but now comprise the duo of David Freudl and Tomáš Procházka. The outfit…