Pernstejn Castle is some 35km north-west of the south Moravian city of Brno. Standing on a rocky hill above the villages of Pernstejn and Nedvedice, it overlooks the highlands of Bohemia and Moravia. It was built in the second half of the 13th century and is one of the best-preserved castles in the country today, attracting some 75,000 visitors a year. 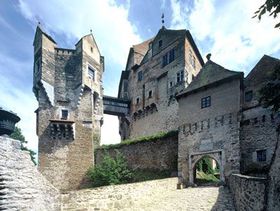 Pernstejn Castle, photo: CzechTourism "The name 'Pernstejn' comes from the German word Baerenstein, which means 'bear stone' or 'bear rock' and is named after the Pernstejn noble family, which owned the entire eastern part of the Czech lands at the time. The castle, of course, was much smaller when it was built in the 13th century but was enlarged in the 15th century, when the nobility took a liking for more comfortable lodgings and the Pernstejns decided to turn their castle into a luxurious residence. But after the early 16th century, the rebuilding slowed down and, with the exception of minor changes and additions, the appearance of Pernstejn Castle today is pretty much the same as it was then," 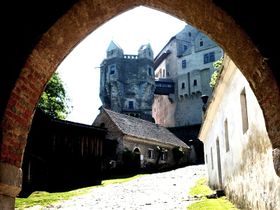 Pernstejn Castle, photo: Ivan Holas ...says Jaroslav Kinz, a tour guide at the castle. The 15th century rebuilding transformed the original fortress into a picturesque fairy-tale palace. But the castle was also fortified further to protect the Pernstejn family's increasing wealth. Defensive bridges, for example, were built between rooms in different parts of the castle. Thanks to the wall paintings, verses, and secret symbols on the walls of the castle corridors, a mysterious atmosphere hangs in the air. Legend has it that Perstejn Castle also has a White Lady who appears in the grounds, only wearing black when there is bad news to tell.

The second half of the 16th century saw the economic collapse of the Pernstejn family. In 1596, the castle was sold, with the later owners mainly focusing on the castle's interior. The last owners were the Mitrovskis of Nemysl, who owned it from 1828-1945. But following their support of the Nazi regime during the war, they were forced to emigrate at the end of WWII, bringing Pernstejn Castle into state hands. 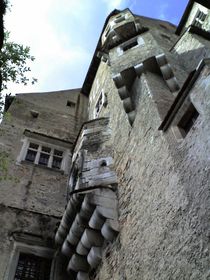 Pernstejn Castle, photo: Petr Bačík "There are four tours that are offered to visitors. One of them focuses on the days of the Mitrovskis. The main tour, though, looks at the castle's transformation throughout its history - from the 13th century up to date. Visitors learn about its different owners and the various architectural styles that Pernstejn has witnessed. Another tour looks at the architecture and the construction phases in more detail, starting from the cellars all the way to the timberwork of the roofs. The fourth tour is more about liturgy, and includes an analysis of the Castle Chapel's interior decoration, and visitors also get to climb up to the Clock tower to view the mechanism."

A simple walk through the castle grounds is just as rewarding as the tour of the interior. If you look carefully, you notice depictions of an aurochs' head with a ring through its nose in many parts of the castle. An aurochs is an extinct long-horned wild ox and its head is now in the coat-of-arms of the Pernstejn family. 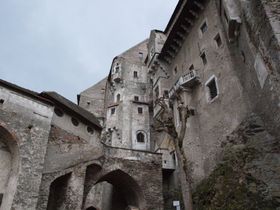 Pernstejn Castle, photo: Josef Šmejkal "A legend has it that every evening after returning from work the coal merchant Vojtech - a forefather of the Pernstejn family - would find his home ransacked. He decided to look for the person responsible and discovered that it was a big black wild ox. He caught it and, pulling it by a wooden ring that he had pierced through its nostrils, brought it before the king, where he then chopped off the ox's head. As a reward for such a heroic act, the king gave Vojtech permission to carry on with his trade wherever he wanted and encouraged him to 'colonize' the region and put an ox's head in his family's coat-of-arms." 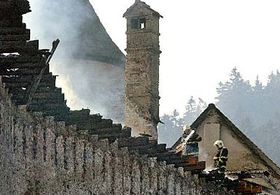 Pernstjen Castle after the fire, photo: CTK Above me, on the second floor of the castle, are three windows of different shapes and sizes. They look like they belong to three small rooms but as I just discovered, they actually belong to one big hall - the Hall of Conspirators. Conspirators are said to have held secret meetings here at night to plot against the Habsburg king and emperor Ferdinand II. The conspirators are said to have chosen this hall because they could hold meetings with the light on all night, without anyone, who was looking at the castle from outside, getting suspicious, as it looked as though the lights were on in three small different rooms.

Outside the castle gates, stands a very large ancient yew tree, protected by a fence. According to local residents, it has a very special bond with Pernstejn Castle:

"Legend says that when they started building this castle seven hundred years ago, a pilgrim who was returning from the Holy War, walked by. He looked up at the construction, put his wooden walking stick into the ground and proclaimed that it would grow roots before a castle would ever be built on the rocky hill. The castle was built and the stick grew into a large yew tree. Ever since, it is believed that anything that happens to the castle affects the tree and vice versa." 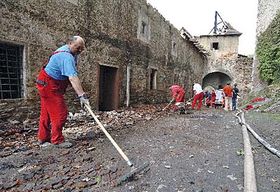 Pernstjen Castle after the fire, photo: CTK Last year, a large branch of the yew tree broke off and the castle warden feared something bad would happen to Pernstejn Castle. Soon after, his fear became reality as heavy accumulated snow put a hole into one of the castle's roofs. But the castle warden's relief that the broken branch only brought on a damaged roof, was not to last long...

Last Friday morning, a resident from the nearby village of Nedvedice warned the castle warden that a fire had broken out in the storehouse. Fire fighters struggled to contain the fast spreading flames and after a two-hour battle got the fire under control. Although the castle warden and his wife acted quickly and managed to save some of the most valuable pieces kept in the storehouse, much was lost. 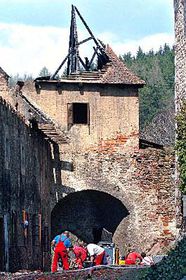 Pernstjen Castle after the fire, photo: CTK Dr Eva Dvorakova is from the National Heritage Institute in Brno:

"The works in the storehouse were mainly from the 18th and 19th centuries and included furniture, paintings, prints, pewter ware, priests' habits and church artefacts, which were all already damaged somehow, and that is why they were in the depository."

An Interior Ministry committee is assessing the damage and police investigators have yet to find out what set off the fire. Preliminary estimates have put the damage at 100 million Czech crowns (a little over 4 million US dollars) but a list of damaged and destroyed works has yet to be completed. Despite the tragedy the entire staff at Pernstejn Castle has been working around the clock to make it possible for the castle to be reopened to the public this weekend...

"There were no fire detectors and the castle was not insured. The state will most probably have to cover the damage and admission collected from every visitor will help reconstruction. The surrounding districts and local residents have expressed their solidarity and offered to make financial contributions. There will also be a number of collections. One is being prepared by Czech Television, for example, and all of this money will have to be used for the restoration."

Clean up operation at Pernstejn Castle

A clean up operation is underway at Moravia's Pernstejn Castle, which was extensively damaged by fire on Friday. Sixteen fire units…

Pernstejn Castle near the city of Brno has been damaged by a fire which started around 6 am on Friday. A collapsed roof is thought…