Plíšková into fourth round at US Open but Kvitová fails to reach Grand Slam last 16 yet again; Slavia leapfrog Plzeň at top of table after dramatic drubbing; and Dukla set new record for worst start to season with seventh defeat.

Plíšková sets up clash with Serena in New York 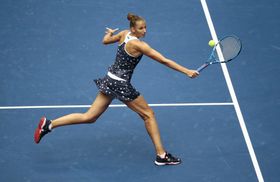 Karolína Plíšková, photo: ČTK/AP/Andres Kudacki Karolína Plíšková reached the fourth round at tennis’s US Open for the third time in succession on Sunday. The Czech player beat Ashleigh Barty of Australia 6-4 6-4 to set up a clash with US star Serena Williams, who has 23 Grand Slams titles to her name.

The Czech women’s doubles pairing of Kateřina Siniaková and Barbora Krejčíková have also advanced to the fourth round in Flushing Meadows. After winning the French Open and Wimbledon already this season, the pair are the top seeds at the last Grand Slam tournament of 2018.

Nineteen-year-old Markéta Vondroušová will be hoping to follow her compatriots into round four. The left-hander faces Ukraine’s Lesja Curenko on Monday, after the recording of our programme. 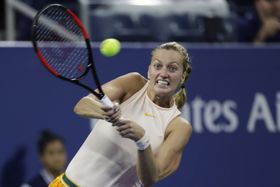 Petra Kvitová, photo: ČTK/AP/Mark Lennihan However, the Czech women’s tennis number one, Petra Kvitová, has already packed her bags in New York. The 28-year-old, who was ranked fifth at Flushing Meadows, lost 5-7 1-6 to 20-year-old Aryna Sabalenka of Belarus.

That result means that two-time Wimbledon champion Kvitová has failed to make it to even the fourth round stage of any of this season’s four Grand Slam tournaments. 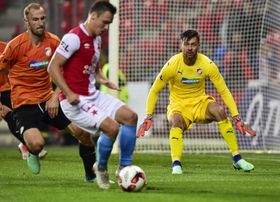 Slavia Prague - Viktoria Plzeň, photo: ČTK/Roman Vondrouš Slavia Prague have replaced Viktoria Plzeň at the top of the Czech football league after a 4:0 victory over reigning champions in the capital in the most hotly anticipated clash of the season so far.

The hosts opened the scoring after just three minutes through Souček and were awarded two penalties, converting one. The visitors had defender Hubník sent off five minutes before half-time in Saturday’s game.

Previously Plzeň had taken the maximum points in the opening six rounds of the league and Slavia are only in front of them on goal difference.

Sparta Prague are hot on the heels of the top two after the country’s richest club beat city rivals Dukla 2:0. Dukla are suffering a torrid time so far this term, having become the first Czech top flight side in history to lose their first seven matches of the season.