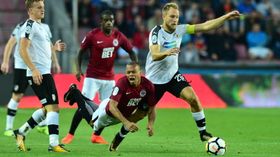 Sparta Prague - Viktoria Plzeň, Daniel Kolář (right), photo: CTK Viktoria Plzeň have maintained their stunning start to the season after beating Sparta Prague 1:0 in the capital on Sunday to make it 10 wins in 10 outings. Plzeň’s latest triumph sets a new record for consecutive victories from the beginning of the domestic football league. More importantly, it leaves them a full 15 points ahead of putative title rivals Sparta and eight ahead of second-placed Slavia Prague.

Sparta had a number of penalty shouts turned down and a legitimate looking goal disallowed for offside, but the only goal of the game came from the head of Plzeň’s star performer Daniel Kolář.

The West Bohemian club have won four league titles since 2011 but captain Kolář is refusing to discuss their chances of repeating that feat this term. Andrea Stramaccioni, photo: CTK “As far as I know, there are still another 60 points to play for, so it’s really premature to talk about the title. We’re glad we won today and now we’re going to concentrate on our next match. Our aim is to play the best football we can and to win every game. We’re doing our job and naturally every time we get a good result and play well it increases our confidence.”

For his part, Sparta’s Italian manager Andrea Stramaccioni said he felt his charges deserved more out of the game. 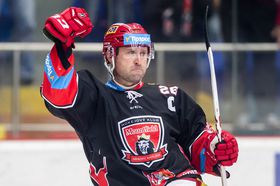 Jaroslav Bednář, photo: CTK In the Czech ice hockey Extraliga Hradec Králové won the most closely watched game of the 13th round on Sunday, trouncing Pardubice 6:0 in the East Bohemian derby. Indeed it was Hradec’s sixth straight win over their local rivals. The club’s captain Jaroslav Bednář, who was playing his 700th Extraliga game, told Czech Radio he was glad to see Hradec Králové doing so well following an early-season losing streak.

“The first three games didn’t work out for us, in terms of either productivity or defence. Now you can see that we are on the up. We play with more confidence and take more risks with the puck than at the start of the season. I’m sure our performances will improve even further.”

Czech tennis player Barbora Strýcová has climbed one spot to 25th in the world after winning the Ladies Linz tournament on Sunday. The result ended a six-year wait for a second WTA singles title for Strýcová, who has 20 doubles trophies to her name.

This year’s Wimbledon has been a successful tournament for Czech tennis in the doubles category. Barbora Strýcová won the women’s competition with…