Jagr arrives in Prague ahead of Ice Hockey World Championships 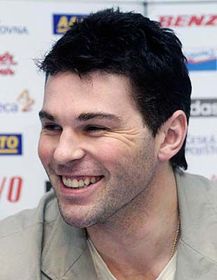 Jaromir Jagr, photo: CTK The biggest star of Czech ice hockey Jaromir Jagr has just reported for duty with the national team ahead of the sport's World Championships. The forward has never won the World Championships, but will have increased the anticipation of Czech fans by saying the Vienna competition should be similar to Nagano, where the Czechs won Olympic gold. Jagr was speaking on arrival in Prague from Russian league club Omsk, where he made a huge impact after the NHL season was cancelled.

"The NHL has a certain standard and if you return from playing in the NHL, where you play a lot of hard games against the best players, you are really playing at peak level. Russian hockey is different - you skate more than in the NHL. But I have to say the standard in Russia was much higher than I expected...we'll see how it goes, if playing there helped me or not."

The Ice Hockey World Championships get underway in Vienna in just under two week's time. The Czech Republic's first game is against Switzerland on May 1; before that the team will have a have a chance to warm up with a two-legged play off against Finland to decide third place in the Euro Hockey Tour. 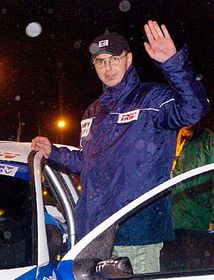 Tomas Vojtech, photo: CTK There was tragedy in Czech motor racing on Saturday when the Pelhrimov Rally ended with the death of driver Tomas Vojtech. Vojtech at first appeared to have had a regular accident when his Peugeot 206 went off the road, but in fact he had suffered a fatal heart attack. Tomas Vojtech was 31 and one of the Czech Republic's leading rally drivers.

After months of buildup to the election of a new chairman of the Czech football association, Friday's vote ended in farce and recriminations when the favourite Vlastimil Kostal came under fire from delegates from Moravia and failed to win the post. A new vote will be held in mid June, but one thing is clear: whoever wins will have a job on their hands to improve the image of scandal-ridden Czech football. 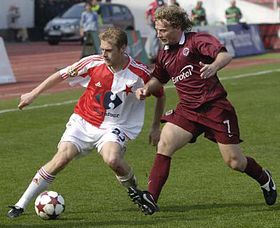 Sparta - Slavia, photo: CTK In the Czech league all eyes were on the 261st Prague "S" derby on Saturday. League leaders Sparta led 1:0 for most of the game after a Karel Poborsky strike, but with just five minutes to go Karel Pitak scored for hosts Slavia to make it 1:1 at fulltime. It was the last Prague derby for Slavia legend Pavel Kuka; the former international is retiring at the end of the season at the age of 36.

The Czech Fed Cup team is preparing for a World Group II clash with Japan in Prague next weekend. New coach Tomas Petera says the team's main aim this season is beating Japan and winning a place in the elite World Group once again.

Slavia Prague have qualified for the Champions League for only the second time ever and the first time in 12 years. But how have Slavia…

The new season in Czech football’s First League gets underway on Friday evening, when Jablonec play host to Bohemians 1905. Champions…