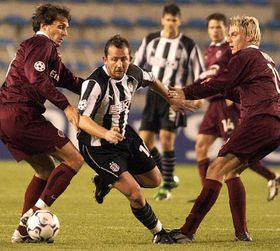 Sparta Prague - Besiktas Istanbul, photo: CTK All Czech football fans are celebrating Sparta Prague's 2-1 victory over Turkey's Besiktas Istanbul in the Champions League on Wednesday. Besiktas took to the field with a team that was considerably weakened by the absence of striker Ilhan Mansiz, who was suspended, and the injured midfielder Tumer Metin. Nevertheless, the Turkish side looked the better of the two teams in the first half, controlling the play for the most part and creating what few chances there were. Sparta improved in the second half, as the players began to probe the three-man Besiktas backline. Sparta finally broke the deadlock in the 58th minute when striker Libor Sionko found Lukas Zelenka on the left side of the penalty box. Zelenka slipped past the Besiktas defence and slotted the ball into the net to put the home side 1-0 up. Their lead lasted only two minutes. Sparta keeper Jaromir Blazek clumsily brought down Sergen Yalcin and Spanish referee Manuel Enrique Mejuto Gonzalez immediately pointed to the spot and Daniel Pancu converted the penalty kick to level the scores. However, six minutes before the end of the match, experienced midfielder Karel Poborsky netted the Czechs' second, securing three points for his side.

At the halfway stage, Sparta and Lazio have four points, Chelsea top the group with six points, while Besiktas prop up the table with three points.

Czechs have been doing quite well at the Swiss Indoor championship. Tomas Zib beat Stanislas Wawrinka of Switzerland 7-6 7-6 in the first round, while fifth-seeded Jiri Novak defeated Arvind Parmar of Great Britain 3-6 6-3 6-0. Novak, the world number 17, was outplayed in the opening set by the Briton ranked 146 places below him, but recovered despite failing to find his best form. Novak, who won his only title this season in Switzerland's Gstaad Open in July, took the match to a deciding set and Parmar's game then deserted him. In the second round, Novak will face Spaniard Feliciano Lopez, who is ranked 30th in the world.

And in women's tennis, Czech Denisa Chladkova defeated Slovak Ludmila Cervanova 6-3 5-7 6-0 in the first round of the Linz WTA tournament.

Ice hockey - the latest results in Czech Extraliga: Slavia hammered Litvinov 7-0, and Sparta were held to a 1-1 draw by Karlovy Vary.

One of the most successful female tennis players of all time.