Last week Czech side FK Teplice edged Germany's Kaiserslautern in a 1-0 win at home - with the Czechs going ahead 3-1 on aggregate. The game saw strong play by the Czech side, especially in the first half, when German keeper Tim Weise made several key saves, including stopping a well-aimed volley by Pavel Horvath. The second half then proved luckier for the Czechs: Teplice's Henrich Bencik finally broke the deadlock, scoring the game's only goal, a beautiful 71st minute strike set up by team-mates Pavel Horvath and Jan Rezek. Bencik then had an opportunity to double the lead but was denied by the German keeper. Teplice's victory marks its third important win over Kaiserslautern: last year the German side was trounced by Teplice 4-0 in the Intertoto Cup. 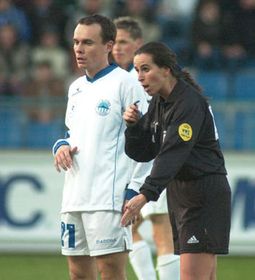 Dagmar Damkova, photo: CTK On Saturday Dagmar Damkova made history as the first woman to ever be the main referee for a Czech first division game. Ms Damkova presided over a match between Liberec and Ceske Budejovice and by most accounts did a great job, in many respects the best part of an otherwise less than impressive match, which Liberec eventually won 2-1. Before the game Ms Damkova received a kiss from both team captains - afterwards she was praised by the coaches and the players. She now becomes only the second woman in Europe to ref at highest level in men's league football.

Meanwhile, in the German Bundeslige Czech striker Jan Koller played a key role in Dortmunds 6-2 win over Hannover at the weekend, while striker Patrick Berger scored a lone goal for Portsmouth to sink his former side Liverpool. The win pushed Portsmouth a point ahead of Liverpool in the Premiership standings to eighth place overall, with Berger celebrated on his team's website as the "Berger King".

Star goalkeeper Dominik Hasek showed weak form on Saturday and suffered his first loss since his return to the NHL with his team the Detroit Red Wings. They were downed 4-3 by the Pittsburgh Penguins. The game started well enough for the Wings who took control early and scored three goals to lead 3-1 in the second period. But, the Pens managed to turn the match around with goals from Fata and Czech forward Martin Straka. Detroit's Hasek, faced just seventeen shots. Allowing four in seventeen is obviously less than characteristic for the goalie known as the Dominator.

Jaromir Jagr failed to come away with a point after his team the Washington Capitols were downed twice on the weekend by the Dallas Stars and the St. Louis Blues. Jagr failed to get a single shot off against the Stars on Friday, and got just two against the Blues. Neither, however, found the back of the net.