Slavia through to second round of UEFA Cup 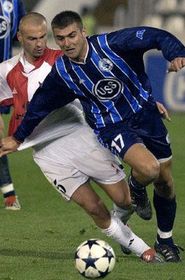 Slavia Prague - Sartid Smederovo, Foto: CTK Slavia Prague have advanced to the second round of football's UEFA Cup, after beating Sartid Smederovo of Serbia 2:1 in Prague on Wednesday; that was the same as the away result, meaning a 4:2 aggregate victory for the Prague club. Miroslav Beranek's men got off to a great start, when Richard Dostalek scored after only five minutes. Less than half an hour later Brazilian striker Adauto finished coolly to make it 2:0. Though the Serbs did manage to score in the second half, they couldn't do enough to turn the tie around. Slavia striker Pavel Fort was satisfied after the game.

"We really wanted to get a quick goal, which we managed to do and I think the other team gave up a little. Then we scored a second...it was quite surprising that Sartid started to improve in the second half and played some really good football, but we managed to hold on well. Now I hope we get some quality team in the draw for the next round."

Czech Under 21s to face Switzerland in Euro play-offs

The Czech Under 21 team are to play Switzerland in play-offs for a place in the European Under 21 Championships. The Swiss are regarded as a tough draw for the holders; both legs take place in mid-November.

The Czech football association are expected to be fined by UEFA after Czech fans held up a sign reading "Austrian Football No! Temelin Yes!" during Saturday's Czech-Austria match in Vienna. Temelin is the name of a Czech nuclear power station which many Austrians are opposed to.

This Saturday Dagmar Damkova will make history as the first woman ever to be the main referee during a Czech first division game. Damkova will be in charge of the game between Liberec and Ceske Budejovice, becoming only the second woman in Europe to ref at highest level in men's league football.

The Czech-born tennis legend Martina Navratilova is - at the age of 47 - going to represent the United States in a Fed Cup semi-final tie against Belgium next month. Navratilova, who is unbeaten in 37 Fed Cup matches, will become the oldest player to take part in the competition. The most successful women's player ever also plans to represent the US at next year's Olympics.

Novak into third round of Madrid Masters

Czech men's number one Jiri Novak has reached the third round of the Madrid Masters, after the eighth seed defeated Karol Kucera of Slovakia 6-2, 1-6, 6-2 on Wednesday.

Pardubice three points ahead in Extraliga

With a quarter of the Extraliga ice hockey season played, Pardubice are three points ahead of the competition after beating Karlovy Vary 6:1 on Tuesday. Sparta Prague, who beat Znojmo 5:3, remain in second. Perhaps the biggest surprise of the season so far is how badly Ceske Budejovice are doing: they drew 0:0 with champions Slavia on Tuesday, but only have 4 points from 13 games.

Jagr likely to play in Russia in event of NHL strike

Czech star Jaromir Jagr says he may play hockey in Russia next season, if a threatened NHL strike goes ahead. CSKA Moscow are reportedly the club most likely to hire Jagr, however temporarily.