Even though the Czech football team have already qualified for Euro 2004, they will be aiming to maintain their unbeaten record - and excellent form - under coach Karel Brueckner, when they take on Austria in Vienna on Saturday. That may not be so easy, however, with six of the players involved in last month's win over the Netherlands unavailable. Poborsky and Ujfalusi are both suspended, while Rosicky, Baros, Grygera and Smicer are all injured. Vladimir Smicer, who picked up an Achilles tendon injury during a game for his club Liverpool on Saturday, says it's fortunate that only pride is at stake for the Czechs.

"I don't recall us ever having so much bad luck or so many players injured at the same time. It's a good thing that we qualified already by beating Holland and that the game against Austria doesn't decide anything. I'd like to go to the game in Vienna, if they let me go: it depends what the doctors say."

There has been some good news for coach Karel Brueckner: striker Jan Koller has recovered from a chest infection and is available. And among the replacements in the Czech squad, Rudolf Skacel (called up for the first time) impressed at the weekend, when he scored his first goal since signing to Marseille recently. 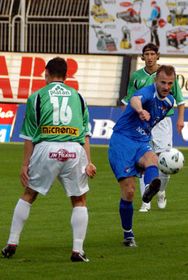 Ostrava - Jablonec, photo: CTK Another player called up for the game is the Czech league's top scorer, Marek Heinz, who scored once again on Saturday. Though his club Ostrava could only manage a 1:1 draw away to Jablonec they still lead the table by five points, though champions Sparta could narrow the gap to four with a win over Plzen at home on Monday afternoon. "Blood flows in Teplice" runs a headline in Monday's edition of the daily Sport, referring to Slavia Prague goalkeeper Matus Kozacik, who needed 20 stitches in his head after a clash with Teplice's Henrich Bencik on Saturday. The young Slovak was replaced by former first choice keeper Radek Cerny, who seized the opportunity to impress and helped Slavia to an important 1:0 away win. Elsewhere, Liberec were beaten 2:0 by Pribram and Brno, who started the season well, lost for the second time in less than a week, this time at the hands of Zlin.

Blsany have sacked coach Guenter Bittengel, after the club picked up a miserable total of two points in the ten games they have played this season. He is being replaced by former Czech international Michal Bilek.

In the ice hockey Prague derby on Friday, last season's champions Slavia squandered a two-goal lead to eventually draw 2:2 with Sparta; Sparta's veteran goaltender Petr Briza was credited with keeping his team in the game. Slavia improved on that result by beating Vsetin 5:2 on Sunday, while league leaders Pardubice continued their excellent run by beating both Litvinov (6:1) and Liberec (4:2) at the weekend.