One of the staples of Czech Christmas, along with fried carp, Christmas cookies and fairy tales, is Jakub Jan Ryba’s Christmas Mass. The mass composed by a small-town teacher in 1796 has become the most popular piece of Czech Christmas music ever written. It is performed in churches, concert halls and resounds in millions of Czech homes during the Christmas season. So on Christmas Eve, we would like to share this musical experience with you and have selected a 1998 recording that has been hailed as the best recording of the Czech Christmas Mass ever made. It is with the famous Czech mezzo-soprano Magdalena Kožená who back in 1998 was at the start of a promising career. 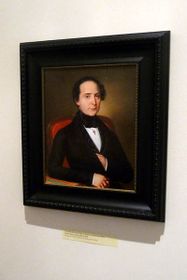 Jakub Jan Ryba, photo: Václav Žmolík Jakub Jan Ryba’s Christmas Mass is often described as a Christmas cantata, based on pastoral motifs. Because of its folk character and simplicity, it was excluded from the Catholic liturgy. On the other hand, according to critics, it is precisely this trait that has made it popular with the public for over 200 years now. Many put its attraction down to the simplicity of expression, the mood of joy that it evokes and the fact that, while it has a Latin structure, the lyrics are Czech, which in its time made it easily comprehensible and immensely popular. It has the charm of Josef Lada’s drawings of a Czech winter and the structure of a school nativity play which very likely inspired the school teacher. As one critic noted “it was not Ryba’s ambition to write a monumental piece of music –he wanted to address all people and tell them this wondrous Christmas tale in a manner reflecting humility and joy.”

The mass consists of nine parts:

Kyrie – the first part of the mass, the Kyrie, describes a village scene where a young shepherd wakes up his master to tell him about a strange heavenly light and wondrous music coming from afar.

Graduale – in the third part shepherds assemble the people to tell them the glad tidings.

Credo – Credo describes the preparations for the pilgrimage to Bethlehem.

Offertorium – tells of the gathering in the manger; people bring gifts to Baby Jesus.

Sanctus – is the shortest part of the composition, an angelic hymn.

Benedictus –this part, with a soprano in the lead role, is dedicated to the celebration of Jesus.

Agnus Dei– sings the praises of the Saviour and asks for the protection of all people. 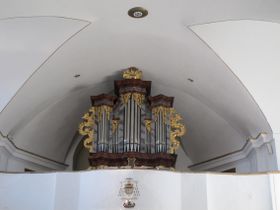 The organ in the church in Rožmitál pod Třemšínem, photo: Martina Schneibergová Though Jakub Jan Ryba was a prolific composer and created more than 1,000 compositions, his Czech Christmas Mass remains one of the few works performed regularly to date. The school teacher composer and musician did not live to see its success. He took his own life in a forest near Rožmitál in 1815 – he was deeply depressed and so poor that he was unable to support his family. Today a trip to Rožmitál for a rendition of Jakub Jan Ryba’s mass in the Church of the Holy Cross is almost a pilgrimage.

Adéla and Petr Mucha on Christianity, Christmas and the Underground Church under Communism

Thirty years ago this Christmas, Czechs were in an especially festive spirit – the entire Communist Party leadership had resigned a…

A jazz take on traditional Christmas songs and carols

Czech Christmas wouldn’t be complete without traditional Christmas carols. To mark the occasion, we’ll be listening to an album entitled Christmas…

Czech Christmas is unthinkable without a vast variety of cookies. Typically, Czech households start baking them at the beginning of…