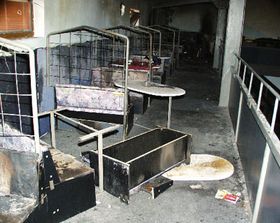 The tragedy at the Karvine disco, photo: CTK A wide variety of stories jostle for attention on Monday's front pages. There is coverage of tragedies at home and abroad: a deadly fire at a disco in east Moravia that killed a seventeen year old girl and injured 61 young people, the train collision in Switzerland in which a young Czech woman lost her life and Sunday's rocket attacks on the al Rashid Hotel in Baghdad, in which at least one Czech national is reported injured.

The tragedy at the Karvine disco has highlighted a dangerous trend, says Mlada Fronta Dnes. A vast amount of discotheques and night clubs in the country simply do meet required safety norms. After the initial inspection, many owners re-construct interiors to meet their own needs, the paper says. Exit doors are walled in, or barricaded by furniture, emergency exits are locked and fire extinguishers are often missing. Thousands of people are at risk daily, the paper says.

Another big story on Monday's front pages is Czech Television's intention to broadcast live the trial of a former high-ranking civil servant accused of planning the murder of a journalist. There is a great deal of controversy as to whether this is appropriate. The Prime Minister Vladimir Spidla, Justice Minister Karel Cermak and President Vaclav Klaus have all criticized the plan in the media.

If the live broadcast goes ahead it will be an important precedent, says Hospodarske Noviny. But there is not much in the way of justification as to why this particular case should set such a precedent - the paper points out. Could it be because a journalist was the intended victim?

Mlada Fronta Dnes is also against the live broadcast, saying it would turn a court case into a TV show. Putting Karel Srba and the jury in the spotlight would not necessarily mean an end to democracy, the paper says, but public pressure and newspaper headlines would put unnecessary pressure on all concerned. Meanwhile, Czech public television is standing by its decision and has published 10 reasons for going ahead with the broadcast, one of them being the public's right to information.

The Czech national holiday on October 28th, has also received plenty of media attention. Since the papers do not come out on Tuesday most have included special sections devoted to the anniversary of the setting up of independent Czechoslovakia in 1918. Lidove Noviny even carries a re-print of its edition dated October 29th, 1918, announcing the news of the birth of Czechoslovakia and reporting on the events that led up to it.

However not everyone is happy with marking the day as a national holiday. Michal Musil of Lidove Noviny wonders why October 28th should be considered the country's main national holiday when it marks the birth of a state that no longer exists. Given the course of developments, the anniversary seems to be absolutely dead, Musil says and argues that the main state holiday should either mark the country's return to democracy in November of 1989 or the establishment of an independent Czech Republic on January 1st of 1993.