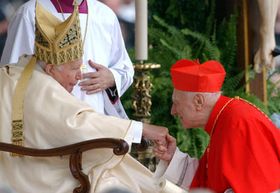 But so huge are the problems facing healthcare, writes MLADA FRONTA DNES, that Finance Minister Bohuslav Sobotka will be given special responsibility over the sector in the soon-to-be-created post of deputy Prime Minister for public finance reform. Prime Minister Vladimir Spidla refused to confirm the details of Mr Sobotka's new appointment. "No comment" was all he had to say on the matter.

Also making news in MLADA FRONTA DNES is Oldrich Stransky, Holocaust survivor and former chairman of the Association of Freed Political Prisoners. Mr Stransky was removed from his post after he congratulated Bernt Posselt - head of the Sudeten German Landsmannschaft organisation - on the opening of the Landsmannschaft's controversial new office in Prague. Now, says the paper, Mr Stransky's colleagues want him expelled from the organisation altogether.

However Mr Stransky tells MLADA FRONTA DNES the letter was merely a polite way of telling Mr Posselt he would not be attending the formal opening of the office. That explanation didn't go far enough to please the association's rank and file: "Brother Stransky has lost the trust of most of our members," his successor told the paper. Mr Stransky, a member of the Czech-German discussion forum, is a strong advocate of reconciliation between Czechs and Germans. In September he received an award from Chancellor Gerhard Schroeder.

LIDOVE NOVINY reports on the arrest of a group of businessmen who threatened to break the arms and legs of Czech Television reporter Jiri Hynek. Mr Hynek was forced into hiding after Czech TV broadcast a report exposing the dodgy dealings of the Fytoz herbicide company. Czech TV revealed that Fytoz had been selling a cheap, Russian-made chemical under the brand name of a well-known weed-killer.

Jiri Hynek was forced to seek police protection, says LIDOVE NOVINY, after receiving dozens of threatening messages on his mobile phone. On Monday a special police unit raided a number of homes and arrested Fytoz chief executive Stanislav Ohema and several of his business partners. The six now face up to eight years in prison.

And finally to the tabloid BLESK, and claims that Leninist-Marxist love is blooming in the corridors of the Chamber of Deputies. BLESK claims that Katerina Konecna, a MP for the Communist Party, is spending a suspicious amount of time with her colleague Jiri Mastalka. Miss Konecna, who is blonde, 22, and an expert on dialectical materialism, is being seen more and more with Mr Mastalka, who is twice her age and married.

"My relationship with Mr Mastalka is a friendly working relationship, nothing more," Miss Konecna told BLESK. Others are not convinced. "They're together non-stop, you never see one without the other," says one MP, who asked not to be named. "Everyone here knows about it, it's so obvious," says another. Maybe they're just jealous. 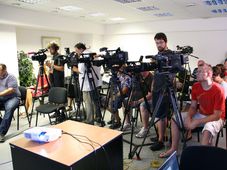 Tomáš Etzler: In China they have everything – but the oppression is more brutal than we had in Czechoslovakia

Few if any Czechs are more familiar with China than Tomáš Etzler, who was Czech TV’s correspondent there from 2006 to 2014. When we…