Monday's Czech dailies don't find one main domestic story. While MLADA FRONTA DNES leads with changes in the prices of car insurance, the main headline in LIDOVE NOVINY shouts "Bomb on tracks stops trains". HOSPODARSKE NOVINY's main front-page story focuses on a widening gap between richer regions with a low unemployment-rate and poorer ones where the number of jobless people keeps rising.

LIDOVE NOVINY writes that a Czech Railways worker found an explosive device planted on a busy railway line between Prague and Plzen on Sunday. The explosive was buried underneath the tracks just outside Prague. The line was closed for five hours. The paper speculates about a possible connection with similar cases earlier this year and back in 1999 and 2000.

The daily PRAVO adds - quoting the commercial television station Prima - that luckily, the explosive did not detonate but merely burnt out. The daily writes that a witness told Czech Television that she had seen a youth with a backpack examining the tracks each time a train passed. According to PRAVO, police removed about twenty metres of the track, cut by the attacker in one place, and took it with them to analyse. They also put an embargo on all information regarding the case.

Staying with PRAVO, and the daily looks at an interesting paradox in the state administration. While officials are required to speak at least one world language if they want to hold a senior position, government ministers refuse to let such strict rules apply to them. That is what interpreters are for, they argue. Trade and Industry Minister Milan Urban tells PRAVO he agrees that government ministers should be required to prove language competence as well. Minister Urban says he can understand English and speaks French but he still relies on the services of interpreters at official meetings.

Prime Minister Vladimir Spidla, who is fluent in German and French, maintains that politicians get their mandates from voters and that is sufficient qualification for them to become government ministers. PRAVO quotes the Civic Democrat shadow Defence Minister Petr Necas who said in connection with the recent EU constitution talks in Rome that an English-speaking Prime Minister was an absolute necessity if the Czech Republic wanted to participate in backstage deals.

LIDOVE NOVINY is the only paper that gives front-page space to former US Secretary of State Madeleine Albright who is currently on a five-day visit to the Czech Republic. "Albright criticises Bush for Iraq" reads the headline. Following an international conference entitled "NATO and the Greater Middle East", Ms Albright said on Sunday that the war in Iraq had not helped to solve the Palestinian-Israeli conflict as the US administration had promised. She said that the health of Yasser Arafat may be frail but his support among the Palestinians is as strong as ever. "It is a bleak picture," Madeleine Albright concluded.

Other papers comment that the Czech-born former member of the Clinton administration is attracting a lot of public attention on her Czech trip. Ms Albright was invited to the Czech Republic by the publisher of the Czech translation of her book "Madam Secretary" and there are a number of book-signings on her schedule. The crowd waiting in front of the bookshop in Brno on Saturday was so huge, PRAVO writes, that the signing had to be prolonged from thirty minutes to a full hour. MLADA FRONTA DNES says that Madeleine Albright had to miss a walk across the historic Charles Bridge on Sunday as too many people recognised her and wanted to take photos with her. 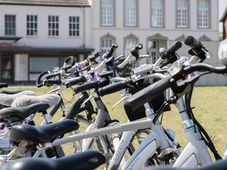