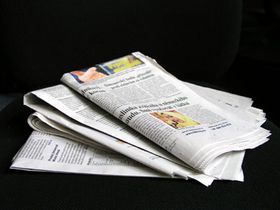 China's first man in space Yang Liwei makes a front-page appearance on all the Czech dailies today: the Chinese astronaut is shown waving to the crowds after orbiting the earth 14 times in his Shenzhou 5 craft. Also making headlines today - a record compensation payout for a man who lost a healthy kidney, and the Pirate of Prague Viktor Kozeny, counting his pennies as he gazes out at the turquoise sea of the Bahamas.

But let's start with that compensation case. As PRAVO writes today, 63-year-old Zdenek Volf was in for an unpleasant surprise three years ago when he entered hospital to have a diseased kidney removed. Doctors removed the wrong kidney by mistake, sentencing Mr Volf to a lifetime of misery and pain: they were later forced to remove his other kidney, and he now has to have dialysis three times a week, can only drink half a litre of fluids a day, and suffers from sleep disorder and depression.

On Wednesday, says PRAVO, Zdenek Volf won a partial victory in court, forcing the hospital to double his initial compensation settlement of 400,000 crowns (14,500 US dollars). And it was very much a partial victory - he'd sued the hospital for a lump sum of 1.6 million crowns plus 3,000 crowns per month for the rest of his life. His lawyer has advised him to take the settlement, writes the paper.

MLADA FRONTA DNES sent a correspondent to the Caribbean island of Nassau to track down the so-called "Pirate of Prague" Viktor Kozeny. Mr Kozeny, wanted for theft and fraud both at home in the Czech Republic and the United States, says he misses the country he hasn't seen in nine years. And nor is he likely to in the near future - he risks immediate arrest the minute he sets foot in his homeland.

But Viktor Kozeny also, somewhat surprisingly, has political ambitions back home in the Czech Republic. He tells MLADA FRONTA DNES that he's planning a victorious return to Prague, where he'll triumph in the elections just like Arnold Schwarzenegger. But what about those tricky fraud allegations? "All lies and fiction," he tells the paper. "And anyway, money isn't everything."

Good news for teachers in this morning's LIDOVE NOVINY: Education Minister Petra Buzkova says she wants almost every teacher to have their own laptop computer. Nice idea, says the paper, but who will pay for it? Under a new bill drawn up by the ministry teachers would pay for the computer themselves and then be allowed to claim the amount on their tax returns. Hmmm, says LIDOVE NOVINY, clearly not convinced.

Finally back to PRAVO, and news that the country's public television network Czech Television has pipped its commercial rival Nova to the post, gaining an exclusive appearance by former US Secretary of State Madeleine Albright, currently on a visit to the Czech Republic. The Czech-born Ms Albright will appear on a popular chat show alongside personal friend and former president Vaclav Havel. She will not, as originally planned, appear on TV Nova's "Sedmicka" programme. 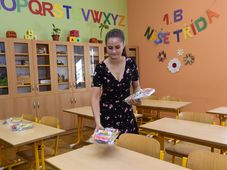 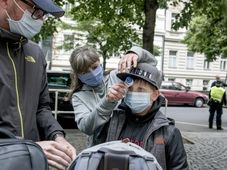 At the start of the week the government announced compulsory facemasks would be returning to schools, shops and many other places in…