Petr Kott, photo: CTK One of the stories featuring predominantly in today's dailies is that of embattled MP Petr Kott - the Civic Democrat who caused a scandal last week when he failed to take part in a final reading that passed the government's fiscal reforms, because he was allegedly drunk.

That prompted his party to try and pressure him to give up his mandate. Says Mr Kott so far - that is something he won't do. He tells MLADA FRONTA DNES the real reason he missed the reading was that he simply didn't want to raise his hand against the reforms. Another quote in the paper reads "I'm no saint, but I see no reason to leave."

Police as well as a team of health specialists are continuing to investigate tragic death of a premature baby decapitated at birth last week, writes Tuesday's PRAVO. According to the daily, an autopsy must now reveal whether criminal negligence was involved.

The autopsy is expected to reveal whether the child died prior to decapitation or not, though at least one specialist has been quoted as saying the child had already died. Meanwhile, neither the mother - who remains in hospital care - nor relatives - have filed charges, a police spokeswoman tells PRAVO.

LIDOVE NOVINY writes on the continuing trial of former prominent secret police officials accused of running the infamous Asanace operations aimed at crushing dissenters within the former communist regime. The daily writes that Monday saw truly remarkable testimony from one of the accused. Zdenek Hanak belittled charges, claiming he had not harmed any dissident who had signed the protest Charter 77. Instead, he told the court, he had really helped dissidents who had been abusing marijuana. He even insisted that several had thanked him for his role. But, reveals the daily, those comments brought smiles of sarcasm to more than a few present at the trial.

There's almost nothing quite as frustrating as being robbed on vacation - but according to PRAVO at least one person is not allowing her holiday to be spoiled: Princess Fahdah Fahed of Saudi Arabia, who lost jewels worth almost three and a half million crowns - around 125,000 euros - while vacationing last Friday in the Czech spa town of Karlovy Vary.

PRAVO writes that although the jewels disappeared from her suite at Hotel Pavlov, no one is yet certain how thieves were able to jimmy the magnetic lock to the princess' room. The theft becomes the highest at a Czech spa in history, but says the hotel's manager - who apologised for the incident - the princess saw no reason to let the theft ruin the rest of her stay. 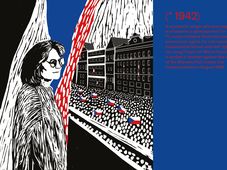