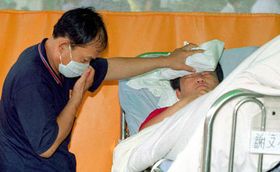 Tchaj-wan, photo: CTK The first suspected case of SARS in the Czech Republic, the international anti-smoking convention - which the Czech Republic has also signed - and the planned trade union protest in the Moravian city of Ostrava - those are the lead stories on Thursday's front pages.

The Cabinet is about to loose its top legal expert, says Pravo, referring to the fact that deputy prime minister Pavel Rychetsky is to be appointed a judge of the Constitutional Court. Some Social Democrats are worried that the quality of government-proposed bills may suffer as a result of Rychetsky's absence. "Another hole in the Titanic for Prime Minister Spidla to fill," the paper says.

The reason for this dire prediction is to be found on the very same page: the Social Democrats preferences have plunged. If elections were held today, says Pravo, citing the outcome of the latest survey, the opposition Civic Democrats would gain a landslide victory with 38.4 per cent of the votes. The Social Democrats would do even worse than the Communists, who would place second with 19.2 per cent.

Marvellous, absolutely marvellous, said Civic Democrat leader Mirek Topolanek, when requested by Pravo to comment on the outcome. The Prime Minister allegedly kept his cool, telling the paper "it's logical that our preferences should slide at a time when we need to introduce painful budget reforms. Wait and see, within six months there will be a turn-around, " he predicted.

Several of the papers have given space to the issue of juvenile crime following Parliament's decision to set up special courts for underage criminals. The proposal came from deputy prime minister Pavel Rychetsky who stressed the need for a special approach to the problem and a wider range of alternative punishments. Mlada Fronta Dnes reports on a shocking case of a racist attack on a Romany family by a group of drunken policemen. According to the Roma family - a mother and her five children - the policemen barged into their flat late at night and beat them up, yelling racist insults at them.

One of the daughters - who is eight months pregnant - says she was brutally pushed and treated without any consideration for her condition. The policemen claim that that they had been robbed at the pub by the eldest son of the family and came to get back their belongings. A special Interior Ministry team is investigating the incident. So far thirty witnesses have been questioned, the paper says. The police have refused to comment on the incident for the time being, but the paper notes that this is not the first time that policemen have been accused of racist behaviour.

Should marijuana be legalized? The issue of soft drugs is back in Parliament once again on the initiative of vice premier Petr Mares, who is a deputy for the Freedom Union. Mr Mares feels that the time has come to legalize a certain amount of marijuana - such as 230 cigarettes - for personal use. The head of the national anti-drugs squad Jiri Komorous has gone in for some heavy lobbying to counter this proposal, sending all parliamentary deputies a letter warning of the dire consequences such a move would have. Marijuana would become as popular and widespread as tobacco is today, he says.

Wednesday's Czech dailies offer a mixed bag of headlines. HOSPODARSKE NOVINY leads with the story that the disease SARS - which has… 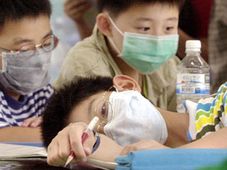 First case of SARS virus suspected in the Czech Republic

Fears of the deadly SARS virus entering the Czech Republic may have become reality. Health officials stated on Wednesday that initial… 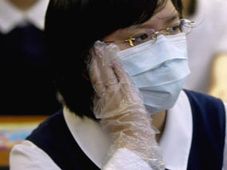 A variety of topics are covered in today's papers, ranging from the fear of the deadly SARS virus spreading to the Czech Republic…