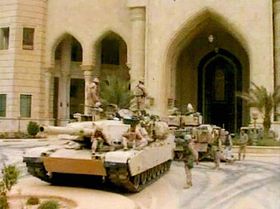 Baghdad, photo: CTK One story dominates the headlines of the Czech press this Tuesday - the United States occupation of the centre of Baghdad. Indeed MLADA FRONTA DNES, HOSPODARSKE NOVINY and LIDOVY NOVINY all carry the exact same photo of a group of six US soldiers in one of Saddam Hussein's palaces.

On the same day the sixth case of self-immolation in the Czech Republic in a month was reported, commentator Bohumil Dolezal addresses the issue in MLADA FRONTA DNES. Analogies with Jan Palach are completely misleading, he says, because in 1969 the country was occupied by Russian soldiers and the people were demoralized.

Palach's death issued a challenge not to collaborate with the occupiers or their henchmen. Today's suicides by self-immolation are false prophets who leave nothing tangible behind them, writes Mr Dolezal.

The same paper reports on a scheme in the town of Ceska Lipa in north Bohemia in which young children are signing up as junior "police officers". Around 100 local children took an oath of allegiance and received "police badges" on Monday evening. Ten-year-old David Studecky tells the daily he used to be naughty but not any more, adding that he was looking forward to riding in a police car and arresting people.

Reactions to the little police officers in the town has been mixed, with some locals afraid the children will be taught to be informers. A police spokesman tries to quell those worries, saying the most they expect is for the children to report some disorder or a graffitied wall. 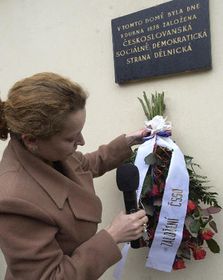 Petra Buzkova, photo: CTK Speaking of walls, PRAVO carries a photo of the deputy chairwoman of the Social Democrats, Petra Buzkova, placing a wreath at a plaque on a pub in the Prague district of Brevnov where the party was founded, one hundred and twenty-five years ago. In those days it was called the Czechoslovak Social Democratic Workers Party.

LIDOVE NOVINY reports prices of land for house building are rising in the Czech Republic ahead of European Union accession, due to fears that they will rise much more dramatically once the country joins the union. What's more, say real estate dealers, there is a shortage of sites. The price of sites in Prague has increased six-fold in the last four years, one of them tells the daily.

HOSPODARSKE NOVINY reports on an ambitious plan to create a connection between the Czech Republic and one of Europe's most important waterways, the River Danube. The Transport Ministry has ordered a study of three possible routes for the new connection from Breclav in south Moravia to the Danube. The idea has not won universal approval, however: as well as the predictable opposition of environmentalists some economists have also cast doubt on the viability of the plan.

And finally, Czech beekeepers have got a bee in their bonnet about Chinese honey, reports MLADA FRONTA DNES. Despite being banned in the European Union due to excessive use of antibiotics, imports of Chinese honey to the Czech Republic have increased dramatically this year. A member of the Czech Beekeepers Union tells the paper he is not happy that what the world rejects is on sale in this country.

Czechs have been marking the 51st anniversary of the self-immolation of Prague university student Jan Palach, who set himself alight…

Ahead of the 30th anniversary of the Velvet Revolution, the Ministry of Culture will designate seven sites as ‘national cultural monuments’. All…