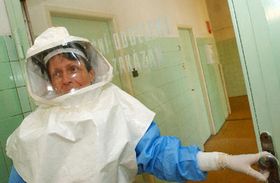 Bulovka Hospital in Prague, photo: CTKSeveral domestic stories vie for attention on today's front pages, most of which still focus on the ongoing war with Iraq. The Foreign Ministry's SARS warning -urging Czechs not to travel to south east Asia - has received considerable attention as has the interior and defense ministers claim that they are being spied upon by the country's intelligence service. 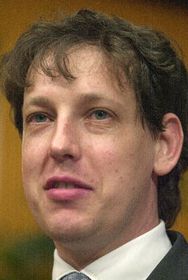 Stanislav Gross, photo: CTK "We are being shadowed by spies" reads the front page headline in Mlada Fronta Dnes. "No, you are not," counters the Prime Minister, who this week rejected rumors that he himself had received an incriminating file on Stanislav Gross and had used it to prevent Mr. Gross from running against him for the post of party leader.

So how much truth is there in the ministers' claims? Although it is hard to tell, the papers show little sympathy. "The intelligence service may or may not have targeted the ministers. So what ?" - says Mlada Fronta Dnes. The service has the right to check out anyone on suspicion of wrongdoing and cabinet ministers are not immune to the process. One reason why the media has scant sympathy for the ministers' claims is, as the paper puts it, that similar complaints have become part of the country's political folklore. And none of the previous claims have ever been proved.

Lidove Noviny reports that "civilian defense" will be reintroduced as a compulsory subject in all Czech schools, after a 14 year break. The subject was scrapped from the national curriculum after the fall of communism. It was not popular with the students at the time because of its strong ideological connotation but the realities of the present day require that children have a basic knowledge regarding evacuation procedures, the use of gas masks and first aid, says Lidove Noviny.

The government is reported to be taking steps to ensure that every school has enough gas masks for its students, should an emergency arise. At present very few schools have them and in many cases they are half a century old and obviously useless, the paper writes.

While Austrian anti-nuclear activists continue in their fight against the Temelin nuclear power plant, the Czech government is preparing for a clash of wills with its own citizens. Within three weeks it should make public a shortlist of 6 localities which are considered appropriate for nuclear waste dumps. Local officials will inevitably put up a lot of resistance, the paper says. A nuclear waste dump in their vicinity is basically a death warrant for the town - people are afraid to live here, tourists stay away, houses and land become worthless, the mayor of one town which appeared on a broader list of 11 locations told Lidove Noviny.

And finally Pravo features an anthropologists' report revealing just how much people's physique has changed from one generation to the next. Today's youngsters are growing up to be an average 12 centimeters higher than their grandparents, they have much bigger feet, and even the shape of their skull is different. While in the past Czechs tended to have a rounder skull, since the 80s children have been born with increasingly more oval bone structure and "longer" faces. Anthropologists are as yet unable to say what caused this change or - what other changes may be in store for us.