The 18th edition of the annual Prague Fringe festival is set to start on Friday. Theatres, cafes and many other spaces in the Czech capital’s picturesque Malá Strana district will host a weeklong programme packed with events ranging from theatre to music. The festival is the brainchild of Scotsman Steve Gove, who has been based in the Czech capital since the 1990s. He says the relatively small size of the Prague Fringe is actually an advantage. 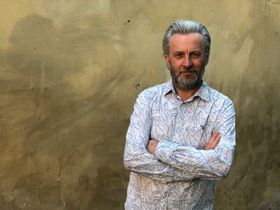 Steve Gove, photo: Miroslav Romaniv “Edinburgh, Perth, Brighton are all big Fringes and there is a different experience you get out of those. Whereas if you go to Prague you get quite an intimate feel to the festival so the venues are all quite small and close together. That makes it a much more manageable festival both for the artists and the audiences.

“When deciding about how we wanted to grow the festival we said we will focus on the audiences. We have about 11,000 tickets for sale every year and we thought: ‘Why expand the tickets available when we are not completely sold out’?

“Instead of doing that we put our focus on building the audiences and the artists really appreciate it. They come to Prague and most of the shows are sold out. There is a really good atmosphere and they do not necessarily have to stand in the streets as they do in Edinburgh.

This year the festival will present a large percentage of shows performed and created by women. What made you decide to focus on female artists?

“The process of programming the Fringe is an unusual one compared to other festivals. In august we put out a call for shows. It is an open arts event that anyone can apply for in a similar vein to Edinburgh or other Fringe shows around the world.

“Edinburgh, Perth, Brighton are all big Fringes and there is a different experience you get out of those. Whereas if you go to Prague you get quite an intimate feel to the festival so the venues are all quite small and close together.”

“However, what is different is that we have a large amount we have to sift through by September. Very quickly this September, during the planning process, we realised just how strong the work from women was and we decided there and then to make it one of our focuses this year.”

What would you say are the highlight performances that visitors can look forward to this year?

“We always have a lot to choose from. There are 52 different shows coming to the Fringe over the nine day period and it is always difficult to highlight one or two. What I like to do is highlight themes.

“For people who pick up the brochure and think: ‘My goodness, how do I start? There is so much to pick from’, I think a good thing would be to just look at the categories and create a theme for yourself.

“For example, if you fancy your theme to be Scotland, click ‘Scotland’ and all those shows will pop up. If you like Scottish non-verbal work, click ‘non-verbal’ too and it will filter them down. “If I had to highlight one show though, it would be Henry Naylor’s work.

“Henry Naylor is an excellent writer of theatre, who has been around the block quite a few times. He is very well known for being one of the writers and creators of ‘Spitting Image’, the British satirical puppet show TV programme, during the 1980s. In the last few decades he has been writing new work, which has always started its life at a Fringe festival. He always gets high accolades wherever he goes. 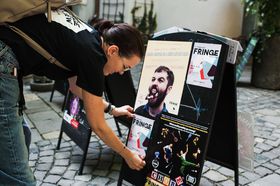 “Last year he brought a very fresh piece to Prague called ‘Games’, which I am sure some of the listeners saw. It was kind of a preparation for Edinburgh and had never been shown anywhere else before. Since then it has been shown in Australia as well as many different places in England.

”This year he has brought a brand new work, which none of us know much about, called ‘Crime Story’. We are excited to have him as part of the wonderful collection of work at the Fringe. He is definitely one to look out for, but I warn you that he is always sold-out, so make sure you get tickets for his show soon.”

In the past you have had some quite unique venues. Will there be any original ones this year as well?

“The two newest venues that we have in the Fringe are Café Club Míšeňská and Golden Key.

“The Golden Key venue is in a beautiful cellar of a 15th century building which we came across when we were on a tour with the manager there. She said that we do not need to go downstairs as there was a cellar there. I said: ‘Oh no, that is precisely why we need to go down there’. We went down and we thought this was a very exciting space and that we would turn it into a tiny little theatre, which it now is with 20 seats.

“We have used it for a couple of years now, but I would encourage anyone who hasn’t visited that venue yet to go there as well as to Café Club Míšeňská.

“[For members of Friends of the Fringe] we have an 18 percent discount this year. So you get the good feeling of contributing something to the festival, but you also get discounts on tickets as well as in our partner food outlets.”

“But like I said, we are always snooping around for new ‘old spaces’ throughout the year.”

Your festival is mainly in English, but artists taking part in the Prague Fringe have also communicated in other languages in the past. A few years back one used “gibberish”. What non-verbal artistic methods will be used this year?

“The good thing about the non-verbal aspect is that it opens up to locals who do not have any English language skills.

“There is no ‘gibberish’ spoken at the Fringe this year as far as I know, but we have got a handful of non-verbal shows.

“In terms of categories we also have one called ‘easy English’, so if you are a visitor not so confident with your English skills, you can definitely take a chance with this category as well as non-verbal.”

What genres will be included this year?

“The largest genre of events that we have is theatre. The Fringe Festival is the English language theatre festival in Prague. That was one of the reasons why we wanted to start it 20 years ago.

“However, there are also other categories. There is also a little bit of comedy, a music and also film.

“We are showing for the very first time in this country a documentary about a character and a dear friend called Jim Haynes. He was one of the founders of the Edinburgh Fringe during the 1950s and 1960s. He is a fantastic advocate for the arts and if you haven’t heard of him it is absolutely recommended you come and watch this movie at the last day of the festival.” Photo: archive of Prague Fringe Festival Part of the festival is the Fringe Club, where audience members, performers and festival staff can meet each other. How does that work exactly?

“We have different themed nights every night at the Fringe. Always from about 11:30pm onwards, although usually things kick off properly at about 12pm.

“It is a way for everyone to gather up together. Whether it is artists, technicians, volunteers, audience members, they all come and gather around the bar.

“We have a Scottish Kaylee night, which has become very popular. Then there is the last night of the Fringe is always a lot of fun. We have the awards ceremony that day. Not the official one, but rather a fun sort of flippant version we call the ‘Fringies’. It is a packed out night. Everyone comes along and traditionally we stay up for as long as possible and for those who hold out long enough we end by all trooping out onto Charles Bridge for the sunrise.

“But yeah, there is something different every night. Sometimes it’s just that the bars open, sometimes we have a sort of silly disco night. It’s a way of getting people together. They are also all free entry events, so you are welcome to come and check it out.”

One of the things you have been highlighting this year Friends of the Fringe scheme. What is it and how will it benefit those who are thinking of becoming one?

“About 15 percent of our audiences are expats and 25 percent are Czech. We do not make a survey every year, but that is the balance from a couple of years back. We also encourage young Czechs to come as it is the audience we would like to develop the most.”

“We are always thinking of ways to raise more money for the festival. It is an organisation which relies on sponsorship and funding. We do have a tremendous group of people who donate to the festival every year. We have sort of formalised this by introducing the Friends of the Fringe scheme.

“This year, on our 18th birthday we thought we would go a step further by introducing massive discounts for people who sign up. Therefore, we have an 18 percent discount this year. So you get the good feeling of contributing something to the festival, but you also get discounts on tickets as well as in our partner food outlets. All the details are in the brochure.

Who makes up your audience?

“A lot of the audiences that we get are tourists and tourists who have specifically come to Prague to go to our festival. We have got dozens and dozens of friends right across the world who are either here already or standing-by to jet off to Prague just for the Fringe festival, which is fantastic. About 15 percent of our audiences are expats and 25 percent are Czech. We do not make a survey every year, but that is the balance from a couple of years back.

“I think that in the early days it was really difficult to get the word out. We were sticking posters up in cafes and having adverts in the Prague Post which existed back then. However, whether you love it or hate it, the advent of social media has probably allowed us to spread the word out quicker.”

“We are quite pleased with the balance but we always like to do marketing on our Facebook page that will also encourage young Czechs to come as it is the audience we would like to develop the most.”

I guess that no one would argue against the fact that Prague Fringe has become quite a success since it was founded back in 2001, but when you look back in retrospect would you be able to pick out a specific thing about which you could say: ‘That really helped us’?

“I think that in the early days it was really difficult to get the word out. We were sticking posters up in cafes and having adverts in the Prague Post which existed back then. We had to very much rely on that method. However, whether you love it or hate it, the advent of social media has probably allowed us to spread the word out quicker.” 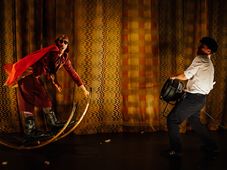 Czech Season in Scotland brings the best of Czech music, dance and visual arts to Edinburgh and Glasgow 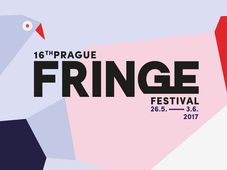 The Prague Fringe grows up

In the nine days from 26 May to 3 June Prague will be treated to its very own version of the Edinburgh Fringe. Audiences will have… 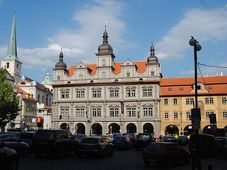 Steve Gove is the founder and director of the Prague Fringe festival, which has just got underway in the Czech capital for the 15th…