Czech hardy man Jaroslav Chytil, 42, has just made headlines by conquering the North Channel. The strait between Northern Ireland and south-western Scotland is considered to be the hardest channel swim in the world and few have managed to complete the crossing. Jaroslav is the 58th person in the world to do so. I spoke to him on his return and began by asking what had made him take on this particular challenge. 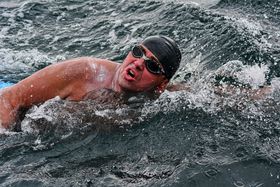 Jaroslav Chytil, photo: archive of Hardy Men’s and Women’s Club “The North Channel is a challenge because of the icy water, but I have engaged in winter swimming for a couple of years now, so I decided to give it a try.”

But you are not a professional swimmer?

“No, I am not. I started with winter swimming in 2011, but I can now swim in cold water for a very long time, so I chose this very tough swim as a challenge. I just wanted to make it.”

You swam 42 kilometers in one go? But the actual crossing is shorter, is it not?

“Yes, the North Channel crossing is about 35 kilometers, but swimmers almost always have to cover more, because of the strong undercurrents you are up against.”

How long did it take you to cover the 42 kilometers?

And just in swimming trunks – you weren’t allowed anything else?

“That’s right, trunks, swimming cap and goggles is all you can have.”

There are many hurdles on the way. What was the hardest part? The cold water? The jellyfish?

“I really think the jellyfish was the hardest part. There are five kinds, but the Lion’s Mane is the worst. In the cold water it feels like you’ve been slapped by nettles very hard, but once you are out and get warmer your veins transport a lot of poison that these creatures have injected into you, so you are smarting all over and wanting to scratch. I felt like I was drunk, although I had not consumed any hard spirits.” 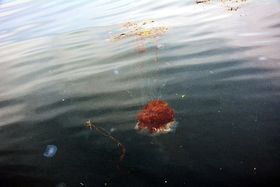 Photo: archive of Hardy Men’s and Women’s Club What kind of assistance do you get from the boat accompanying you?

“Mainly food. I am not allowed to touch the boat or anyone else. But every twenty minutes they would throw me an energy drink – mostly a mix of carbs and minerals.”

That was the only time you could stop swimming?

“Yes, but the feeding was so frequent that I could only stop swimming for ten to fifteen seconds at the most.”

You said that if you got depressed someone could jump into the water with you for a few minutes but was not allowed to touch you?

“That’s the rule, but in my case I didn’t need it. I was focusing hard on my swimming. I did have a crisis around the tenth, eleventh hour, but I was able to overcome it. I was in good shape so I was swimming fast. My stroke rate was around sixty strokes per minute.”

How do you know where you are? Do you get messages from the boat?

What kind of messages? Do they say “go faster” or do they give you moral support?

“Both, both technical information and moral support. They would write where I am, how long I have been swimming for – because your own feeling is very subjective. Also I had my cellphone on the boat and my family and friends wrote me messages and the best messages appeared on the board. I got huge support from my family and there were messages like “Daddy, keep swimming!” “Don’t give up!” and “You are the best Daddy in the world” (laughs). So it was very nice, to read those messages. You can read while swimming, you don’t need to stop. A lot of my friends wrote messages of support which helped enormously. You are in very cold water, it is a depressing feeling because you have been swimming for a very long time, and the jellyfish were a disaster. This year they were overpopulated, so I got hundreds of stings.” 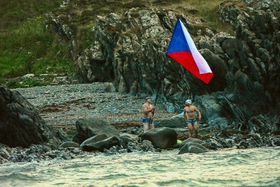 Jaroslav Chytil, photo: archive of Hardy Men’s and Women’s Club Was there a point at which you just wanted to quit?

“Yes, I had that moment as well, but I am not the kind of person who gives up easily.”

So you just kept going?

“Yes, close to the end I had pain in my muscles and there was a low tide as I got close to the Scottish shore, but luckily I was in good shape and was still swimming fast.”

So you were swimming against the tide?

“Yes, at times I was swimming in the same place, and when I stopped for food I was actually going backwards…(laughs)”

You said that when you glimpsed the Scottish coast it did not mean that the end was near, because it seemed to stay that way for ages?

“Yes, you can see the coast for hours without seeming to get closer to it. That’s very depressing. So I decided not to look in that direction.”

Where and how long did you train for? We have no seacoast…

“I would swim in lakes, rivers and also swimming pools. I trained for this swim for two years and when it is winter I couldn’t swim as much as I needed (around 100 kilometers per month) in the cold water so I had to use swimming pools as well. But with the arrival of spring I decided to train outdoors only.” 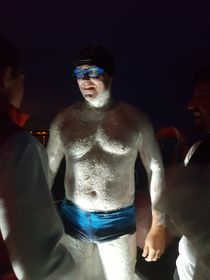 Jaroslav Chytil, photo: archive of Hardy Men’s and Women’s Club So if someone out there wants to give it a try –how much do they need to train?

“Basically you need to swim roughly a hundred kilometers a month for two years and in the last three months you have to swim more. In the last phase I was swimming 50 kilometers per week.”

What was uppermost in your mind when you actually reached the shore?

“It had been a long foreplay (laughs), so it was a very nice feeling. I was very happy. Tired, but very happy.”

You also swam to raise money for a good cause, didn’t you?

“Yes, there is a foundation called Dětská dopravní nadace for children who have lost their parents in car accidents and so on. So I decided to support them.”

Finally, what are the challenges ahead of you? You started out with the most difficult channel crossing – even La Manche is said to be easier – so where do you go from here?

“I would like to swim across Lake Baikal (the oldest and deepest freshwater lake in the world, located in the south of Siberia) because the first people ever to swim across this lake in 1990 were two Czechs - Jan Novák a František Venclovský. But I know it will not be easy to conquer; even the Russians have a deep respect for this lake. The water is about 10-11 degrees Celsius in mid-summer, but this temperature is just on the top layer of the water – say one meter – and if it is windy it could happen you would have to swim for one kilometer in 4 degrees Celsius. So it is a very tough swim. That’s the next challenge for me.”

We should say that you are the hardiest man in the Czech Republic. You are a member of the Hardy Men’s and Women’s Club. What’s your personal record? How long can you swim in cold water?

“My record is 63 minutes in 4.1 degrees Celsius. In 2006 there was a guy who swam for longer, but they had to pull him out and rush him to an intensive care unit. So I am not counting that. So I guess you could say I am the hardiest man in the Czech Republic today. Getting hardy has many positive aspects –it is good both for your physical and mental health.” 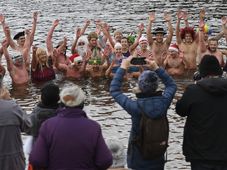 On Sunday Czech ice swimmers launched their season by the Slavoj boathouse in Prague. New members are ritually baptised with a jug… 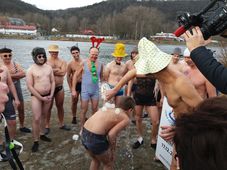 Temperatures close to zero have got most of us muffled up in scarves and woolly hats, but for the Spartan-living members of the Czech… 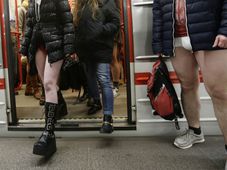