Demagog.cz and the art of political fact-checking

Lenka Chudomelová of Demagog.cz discusses how the group evaluate the statements of politicians – and how being a fact-checker impacts her own outlook. 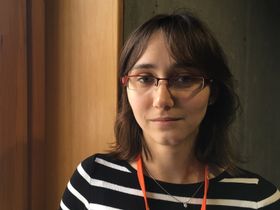 Lenka Chudomelová, photo: Ian Willoughby Demagog.cz have built a reputation as the leading Czech political fact-checking group. But how does their approach to evaluating the accuracy of politicians’ claims differ from the work of similar organisations in other countries? And what happens when political parties challenge their assessments? I discussed these questions and more recently with Demagog.cz expert Lenka Chudomelová.

“We fact-check Czech politicians, elected ones, and we always just fact-check the factual statements that they’ve made.

“So we have to first choose statements that are only factual, because we can’t evaluate values.

“And we want the audience, or readers, to make good decisions, to be informed about our politicians and to choose well.”

What are you fact-checking? I guess interviews? Speeches also?

“We do mainly interviews or debates. Like for example Otázky Václava Moravce, the Questions of Václav Moravec, which is broadcast by Czech Television.

“We sometimes do also some things on social networks, like on Facebook and so on, but that’s not so common.”

Obviously fact-checking groups exist elsewhere, but it says on your website that “the style of selection, processing and evaluation of statements is unique”. In what sense is it unique?

“Well, each of the organisations have a different methodology.

“For example, when we decide to fact-check a debate, we choose every factual statement that the politicians made, so that we can’t be accused of picking just what we are interested in, or just picking false things.

“When we did research on methodology, we think that this is pretty unique because other organisations do pick.

“For example, I talked to a colleague from France, she worked for Libération, and they focus mainly on hoaxes and pick false statements – so that they can inform people about false information.

“But we think that it’s important to fact-check everything, because then we can show the real situation. And the real image of a politician.”

So if a politician makes, say, 15 statements, you mark them and say, 10 are correct, for example? “There are some things we can’t evaluate because there aren’t statistics for it, or other things.”

I presume speed is of the essence for you guys? Especially recently during the busy election period – people need the information almost immediately, because no-one wants to know about some debate 10 days ago?

“Yes, that’s true. But we are limited by our resources. Because we are a non-partisan organization and most of our work is done by volunteers.

“I’m a volunteer. There’s only one person who’s a full-time fact-checker in our organisation. The rest of us are just students who are doing this in our free time.

“You are right, the speed is very important, but we think we should focus more on factual correctness, because it’s sometimes not possible to fact-check all of the things during an evening.”

So you can’t do it in real time, it has to be with a gap of many hours or even days?

“We can’t. But to be honest, no-one does it in real time. Not even big organisations, because it’s not really possible.”

Is there any way of measuring the impact of your work?

“There isn’t really. The International Fact-Checking Network, which we are part of, is actually trying to develop some impact measures right now.

“But now it’s much more about measuring reach, for example on your social networks, or how many views you have on your website.”

Do you have a lot of followers on social media?

Do you often get politicians accusing you of attacking them, or being unfair to them?

“It happens sometimes. I don’t know how often, but yes.

“But they mostly try to give us their sources of information, their numbers. They sometimes try to argue that our numbers are not as good as theirs.

“And of course we look at it and we argue with them.”

Andrej Babiš, photo: Filip Jandourek If they are correct, will you revise their assessment of their statements?

“Yes, of course, we do revise it. And we always write it right below the statements, so that everybody knows that we just made a mistake and we corrected it.”

I see that Andrej Babiš from ANO has created what he calls his own fact-checking site, My Demagogue [Můj Demagog]. He says in part that’s because he likes your work. What do you think his aims are with this My Demagogue site?

“I’m not sure what he means by creating My Demagogue, but we are obviously not happy about it, because he just took our brand and it’s something which we worked hard to build.

“I don’t know what he wants to do with this.

“It’s not real fact-checking, because he doesn’t use – or his people, I don’t think he’s doing it himself – his people don’t use links to good sources of information as we do. This is our essential work.

Could he possibly be trying to undermine you, by doing something that’s similar but different and that could maybe take away from the seriousness of what you do?

“Of course it’s possible, it could impact us.

“But we think that our audience is a bit different from his audience and it probably won’t impact us so much.

“But we also consulted this with our colleagues from other countries and we found out that it’s pretty common now.

“Emmanuel Macron made his own site similar to this and so did Hillary Clinton and Donald Trump.

“So it’s just something that we need to face.”

Maybe it’s hard to quantify this, but are there any subjects that politicians typically lie about or are prone to lie about? 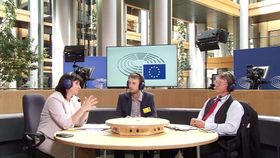 Illustrative photo: archive of Radio Prague “We don’t have these kinds of measures. I really don’t know.”

Are there any political parties who consistently do better and are found to lie less than other parties?

“It’s not really about parties. It’s much more about the people.

“And we don’t really want to compare those things in this way, as you put it.

“Because, for example, if we rate something as false, it can just mean that the politician simply made a mistake. Which is normal.

“It can be that he took statistics from five years ago, or he just made a mistake in thousands of crowns, or something like that.

“So we don’t think that we can do this comparison.”

Is there ever a correlation between politicians lying a lot and doing better in the opinion polls? Does it pay to lie?

“[Laughs] We don’t have these measures or correlations. Sorry.”

If you do this kind of stuff a lot, does it impact your normal life? Do you find yourself speaking to your mum and thinking, You’ve made five false statements since this morning?

“[Laughs]. Not really. But it does impact my position toward politicians.

“I think it’s a bit hard for me to decide who to vote for.

“Because you see all the things that they said wrongly and so on.

“But I don’t think that in my personal life it would have this impact.”

Many people speak about us today living in what they call a post-truth era, in which people seem to care less if politicians tell the truth. So someone like Donald Trump can say pretty much whatever he likes and his “base” will accept it anyway. Does that undermine your work as fact-checkers? Or do away with the need for fact-checking? 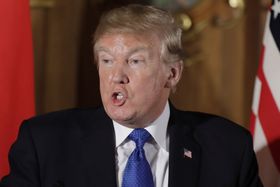 Donald Trump, photo: CTK “In general, I think fact-checkers don’t like the term post-truth era. We don’t really think it’s something that exists.

“I think the problem is that now we are living in a society with many information sources, and the world is very complicated.

“So I don’t think people don’t care if something is true or false. I think they simply don’t trust traditional media.

“They tend to search for simple truths. They want to find a good solution for their lives, for example.

“But I don’t think that it’s really that the facts don’t matter.

“Fact-checking organisations are growing, and the number of us is growing, so I think that trends show that fact-checking information is really important.

“It’s just that the people who use alternative sources don’t trust us. Which is a problem, of course.”