Some six dozen political groups have registered for this autumn’s regional elections. The previous regional elections in 2008 saw 60 groupings, four of which did not run because they failed to meet all election requirements. The elections will show whether the opposition Social Democratic Party will be able to maintain its dominance of all 13 of the Czech Republic’s regions. Apart from the major political parties, extra-parliamentary groups like the Party of Citizens´ Rights of Milos Zeman, Sovereignty of Jana Bobošiková, the Greens, the Pirates and the far-right Workers´ Party of Social Justice will seek the support from voters. 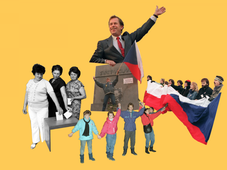 Exactly 30 years ago, on June 8 and 9, 1990, the first free elections to Czechoslovakia’s Federal Assembly in over four decades were…