Many parts of the country were hit by blackouts on Saturday, as strong winds and hailstorms knocked down high-voltage pylons and falling trees damaged power line cables. The power company ČEZ has declared a state of emergency in four regions of the Czech Republic: the Pilsen, Karlovy Vary, Hradec Králové and Pardubice regions. Tens of thousands of people in the country are left without electricity due to six failures on very high-voltage lines.

Railway traffic was suspended between Prague and the Moravian town of Olomouc due to power cuts on the line between Česká Třebová and Kolín. Traffic on the R1 highway connecting Prague and the northern town of Liberec was halted on Saturday as a high voltage pylon fell across the road. The country’s fire fighters were called to over 1200 emergencies on Saturday, the busiest day for them since last year’s hurricane Kyrill. In Business News this week: Czech E-commerce sales rise by 20 percent in second quarter of 2015; Hainan Airlines to launch services… 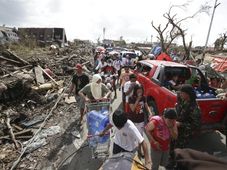 Typhoon Haiyan, which made landfall on Friday, has affected more than 10 million people in the Philippines, with thousands of fatalities…