Removal of munitions at Vrbětice to continue well into 2016

The removal of remaining munitions at the damaged site in Vrbětice near Zlín wil take at least until Q2 of 2016, policewoman Monika Kozumplíková has revealed. To date, some 153 truckloads of munitions were removed, from 17 of 40 storage spaces at the depot. The operation began at the beginning of the February. Safety at the site was severely compromised by an initial explosion at the site last October and it took weeks for conditions to stabilize. Two people lost their lives in the intial blast. 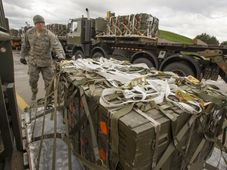 Czech Republic ready to do more in war against ISIS