The nine candidates standing in the Czech Republic’s first direct presidential elections have received their ballot numbers, following a draw by the State Election Commission on Friday. The vote will be held on the second and third weekends of January, with the two candidates who receive the most votes in the first round facing each other in the second. An opinion poll released on Thursday by the PPF Faktum agency suggested the front runner was Miloš Zeman, a former prime minister. 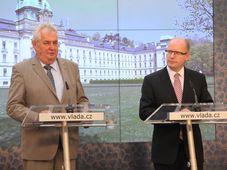 Czech lawmakers are due to begin debating a government draft bill proposing to curb the powers of the country’s head-of-state. Many… Six months after the country’s first direct presidential election, many Czech politicians are already questioning the wisdom of having…