The Czech president, Václav Klaus, has protested to his Austrian counterpart about a film broadcast on Austrian TV simulating an accident at a Czech nuclear power plant. In a phone call to Heinz Fischer on Friday, Mr Klaus described the fake documentary broadcast on Austrian public television as most unfortunate, the Czech news website novinky.cz reported. The 90-minute film, entitled The First Day, was shown on ORF on Thursday as part of an evening marking the 30th anniversary of a referendum in which the Austrians rejected nuclear power. While its makers flagged it as a fictional film about an accident near Austria’s borders, it mentions the Czech power station Dukovany by name. The Czech Republic is portrayed as a country incapable of relaying information correctly and promptly to its neighbours, novinky.cz reported.

Barbara Coudenhove-Kalergi was born in Prague in 1932. As a member of the German-speaking minority in Czechoslovakia, she and her family… 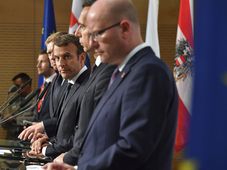