Poll: PM Topolanek scores ‘B minus’ for first month at helm of EU

Prime Minister Mirek Topolánek is doing well at the head of the EU, a poll conducted by the STEM agency for Lidové noviny newspaper suggests. Respondents to the poll were asked to grade Mr Topolánek as if for a school report, with one being best, and five worst. The prime minister’s average was two minus. The poll also found that over 90 percent of those questioned were aware that the country currently held the EU presidency, and that 60 percent of respondents said that they did not like the controversial artwork the Czech Republic chose to represent its presidency – David Černý’s Entropa. 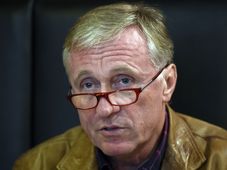