Pilgrims pouring to Velehrad for People of Goodwill Days

People are gathering at the Velehrad pilgrimage site for the annual People of Goodwill Days that traditionally accompany the celebrations of the legacy of Ss Cyril and Methodius, missionaries from Thessalonica who brought Christianity to the Czech lands in the 9th century. Although the main celebrations, including a mass served by Cardinal Dominik Duka, will take place on Sunday, many events are taking place today, such as the unveiling of a sculpture to St. Methodius on the occasion of the 1200 th anniversary of his birth and a performance by a Greek choir from Thessalonica. The celebrations annually attract thousands of visitors and this year is not likely to be an exception despite the tropical heatwave that has hit the country. July 5th is a public holiday in the Czech Republic, celebrating the legacy of the Greek missionaries Cyril and Methodius who came to… 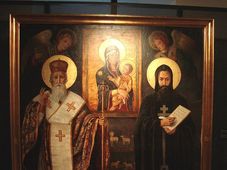 This Sunday falls on July 5, a public holiday in the Czech Republic marking the legacy of Saint Cyril and Methodius, two Christian…