The Foreign Ministry on Friday presented its Gratias Agit awards to people who have worked to promote the good name of the Czech Republic internationally. Among the recipients were the opera star Magdalena Kožená, priest Petr Esterka, who coordinates church services for Czechs in the United States, and German-based artist Jiří Georg Dokoupil. The Gratias Agit awards have been presented annually since 1997. 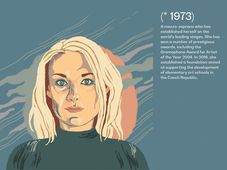 A mezzo-soprano who has established herself on the world's leading stages.