Kateřina Valachová was officially appointed minister of education by President Miloš Zeman in Wednesday during a ceremony at Prague Castle. Valachová takes over from Marcel Chládek who was dismissed on June 5 following fresh reports of bullying his staff. Valachová, who has been appointed by the Social Democrat party, was formerly a deputy minister responsible for human rights. She said she came to a broad agreement with the head of state about the ministry’s goals during a meeting last week to pave the way for her appointment. Valachová, who is being appointed as an independent, is the first ministerial switch made by the Social Democrats in the current government.

In the previous episodes of the Czechs in Brexit Britain series, we explored what worries the local Czech community about Brexit and… 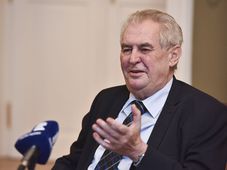 A bid by opposition MPs to remove President Zeman from office failed on Thursday, as the lower house rejected a proposal to file a…