The Czech Union of Freedom Fighters has presented a medal to Communist Party MP Zdeněk Ondráček, who beat up demonstrators while a member of a Communist riot squad in 1989, iDnes.cz reported on Saturday. During a ceremony on Thursday Mr. Ondráček was presented with a medal inscribed “For the homeland and for freedom” by the chairman of the group Jaroslav Vodička, himself a one-time collaborator of the Communist-era secret police, the news website said.

The Czech Union of Freedom Fighters comprises World War II freedom fighters, their family members and supporters. It has faced criticism over the fact that members served the pre-1989 security services. 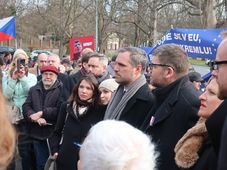 Three weeks ago, a member of the Russian intelligence community traveled to Prague with a suitcase containing the highly potent toxin…